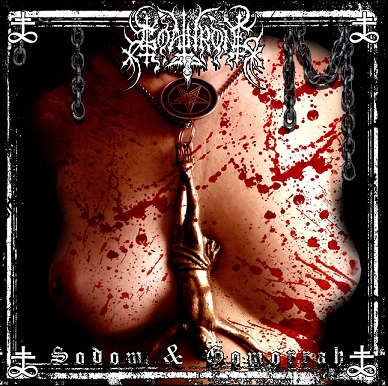 Goathrone from Poland are a bestial Black/Death band who released their debut “The Black” in 2018. A fine album filled with worthy blasphemous bestial black/death metal hymns. Members of this band or project (?) consist of Diabolizer (drums), Bloodwhip (guitars) and Lord K.ommander (vocals and mayhem). All three musicians also play & perform in several other Polish metal bands.

“Sodom & Gomorrah” is their interpretation of the biblical twin cities of evil, lust and depravation. “Prophets of Scum” opens with a rather sick cacophony of creepy sounds and the solemn voice of a woman speaking in Polish as an intro before it suddenly erupts into a whirlwind of heavy bashing drums, ripping guitars and a voice about it all, drenched in reverb – that hardly sounds human anymore. “Sodom & Gomorrah”, “Awakening the Dead”, “Goat Penis Mutilator”, “Mary Fist Orgasm”, “I Am the Vomit Lust” and “Coprophagous Christ” are projectile vomits in the face of our Holy Saviour Jesus Christ.

It’s a must-have for all your selfproclaimed Bestial Black/Death devotees out there. The only drawback, and this is the case with most of the Putrid Cult releases, is the short playing time of a bit over 33 minutes. But who am I to complain? Simple hit the damn replay button.

The first 30 copies came as an exclusive Die Hard version box with the CD, a T-shirt, MC, pin, sticker and a patch. 666 and turn those crosses upside down! (LV)