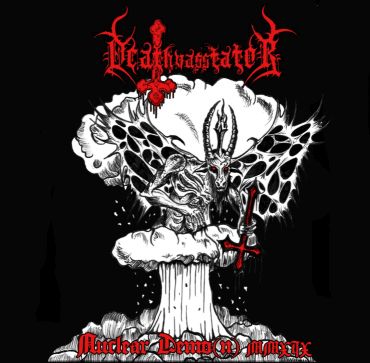 Something’s rotten in the land of Poland (besides the religious / political situation and a couple of ‘back-in-the-day-they-were awesome’ bands) as there is more and more bands producing nightmare fuel music coming out of there. Just like the cover of this one suggests – a demon sitting on the nuclear explosion mushroom, holding an inverted cross in his hands (if the title wasn’t obvious enough)

Deathvasstator are one of the very few polish war metal acts and again, as it is typical in this part of the underground scene, there are very few things actually known about the band. The band consists of two members – Lord K (also of Nekkrofukk) responsible for guitars, bass and vocals, and Diabolizer (besides many other bands he plays in, Throneum might be the most recognized one) – and that’s basically everything I managed to find out. But honestly, it doesn’t really matter, as this is not one of those ‘personality cult bands’. This is a nasty and venomous attack on the weak hearted.

The murky sound signal for immediate nuclear danger, only interrupted by the sounds of machine guns, blends into a guitar attack, which is soon joined by manic drumming. The demonic cavernous vocals come crawling in, at first completely integrated into the noise the instruments are making. If you won’t listen carefully, you’ll just think the signal starting off this album started to shape its noise into something similar to screaming, but still sounding like the signal. After a really short pause, the second song starts even faster than the first, going off with repetitive drumming pattern which soon spawns even more disturbing vocals. Don’t get me wrong, but it’s really difficult to distinguish other instruments beside drums. There’s no melody, no solos, nothing soothing to the ears. To the untrained ear, this album would probably seem like one, filthy, 22 minutes long  aural attack. This is literally one of those albums which catch you, no matter how hard you’re trying to get away, devour you alive, puke out your remains and piss on you.

If you’re into the brutal, uncompromising primal sounds, you’ll get addicted to it. But be careful, this one is limited to 500 pieces and since it came out at the end of June, it’s not gonna wait for you. (Black Mary)