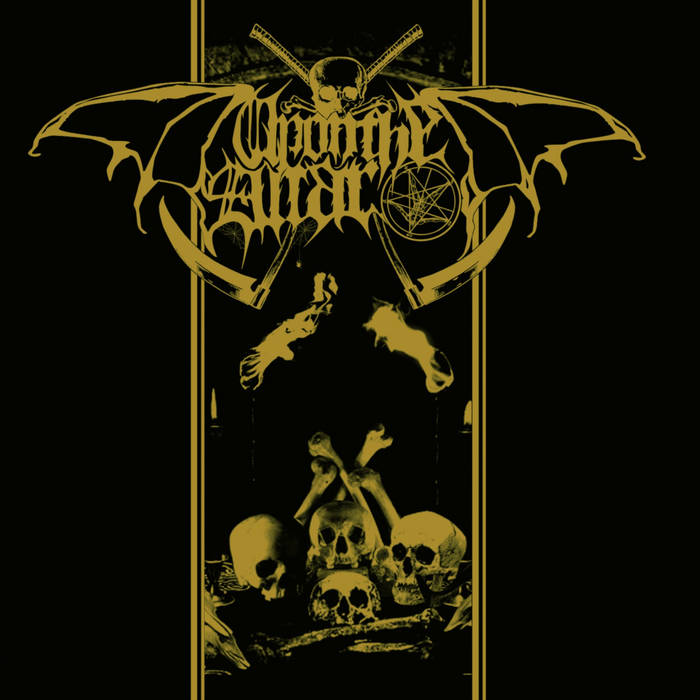 I jumped at the chance to once more review Polish Death Metal band Upon the Altar, as both their demo and debut album are both vicious slabs of haunting, cavernous darkness. Their new release follows a similar pattern to the album, in that it has been released again through Putrid Cult on CD, however this time they have brought a long some friends in the form of fellow Poles, Black/Death Metal band DeathEpoch

Now if you have read my reviews of the demo and debut album from Upon the Altar, you’ll know that they will have to go a long way to top their body of work to date. For this release, the band have dropped the production quality fractionally, and deliberately I’d say, in order to give their sound a thick, swampy atmosphere, and this murky filthiness clings to the guitar leads and bass play throughout. Also added to the mix are some haunting monkish chanting and if even possible, a vocal style that plums the depths of the chasm even further and dredges itself up carrying even more gravel and soil and detritus than before. Even at their slowest and most depraved sounding, Upon the Altar have a grinding, flowing feel to their crusty, sombre melodies, and they combine this effortlessly with the occasional lingering synth tone that brings to mind the Tomb of the Blind Dead series of films. Truly, Upon the Altar get better, and creepier and more barbaric with every release!

DeathEpoch are a new band to me and having given this split release a fair number of spins thus far I feel they fit the tone and atmosphere of this split release fairly well. their opening track ‘§148 art. (Rebirth)’ is a ravenous, yet slow affair that chugs and plods forward at a monolithic pace and sports some barbarically raw vocal work and some impressively maniacal guitar leads and solos. The drumming is belligerent and damaging but I do feel in patches the band lose their sense of rhythm in order to focus on the brutality of the track. They do however put a lot of work into song structure and whilst I’m not a huge fan of some of the samples and tones the band uses in their break sections, as well as the borderline Industrial effects used in ‘§148 art. (Human Beasts)’, there is still much to enjoy from their work.

In truth it was always going to hard for DeathEpoch to rival the sheer deathly hunger and talent that I feel Upon the Altar possess, but in fairness to DeathEpoch they approach the creative side from a fresh angle and produce something both aggressive, off kilter and outside of the box. (Marksson)