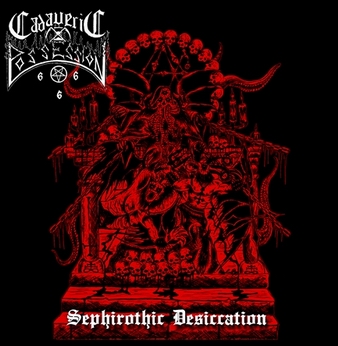 Putrid Cult Records from Poland must be one of thé most industrious and active underground labels of the cryptic Polish underground scene.

The label doesn’t post any bold announcements full of superlatives and big words to promote its releases. It simply announces and releases its products. The Polish underground scene and media absorbs them and spread the news like wildfire. Putrid Cult are ambitious, constantly innovating and by doing so, they draw the attention of other underground labels and distros. The label has become a force to be reckoned with.

The new Cadaveric Possession EP, “Sephirothic Desiccation” is one of their latest batch of releases, described by the label itself as ‘old school Black/Death metal’. The band, consisting of Slav and Ketzer, isn’t new to me, as I dealt with their musical antics before: “Sanctity Collapsed” demo/CD (2018), “Cadaveric Goatserpents’ Coronation” split CD with Hell’s Coronation (2018) and the “The Malevolent Predestination” full length CD (2018). Three releases that were unleashed in a relative short period.

This new EP contains 6 tracks. Being familiar with the band, I took the precaution of removing my trousers, gobbling a handful of tranquilizers and placing two towels underneath my behind.

Creepy piano keys open the first track before a napalm shower of downtuned grinding guitars, bulldozer bass and devastating drum beats hits you in the face. The beastlike ‘vocals’ (sic) are as rotten as can be, reverbing blasphemies all over the place. The faster tracks are usual an unbridled sonic torture, the slower tracks reveal a more doom-ish approach to their music.  Nonetheless – the music is capable of causing landslides and avalanches.

Influences? It’s rather hard to say. Maybe the primitive brutality of Throneum, but also bands such as Hellhammer, Sarcofago, Gravewürm, the “Slow Death” demo/EP from Norwegian Mortem and old Beherit ( e.g. : some of the riffing and drum patterns ) apply to Cadaveric Possession.

One foot firmly anchored into the old school approach, the other being stuck in the realm of bestial Black/Death. The vomited vocals deal with blatant satanism, witchcraft and other nasty rituals that shun the daylight. Cadaveric Possession may sound unstructured or chaotic at first, but replaying their music reveals a very tight operation. It’s heavy as fuck. And vocal-wise Cadaveric Possession are capable of inducing a shellshock effect.

You like your bestial Black/Death primal, ferocious, utterly heavy and insane? Check out Cadaveric Possession. And me? I hope to regain control of my bladder in due time. You’ve been warned! (LV)