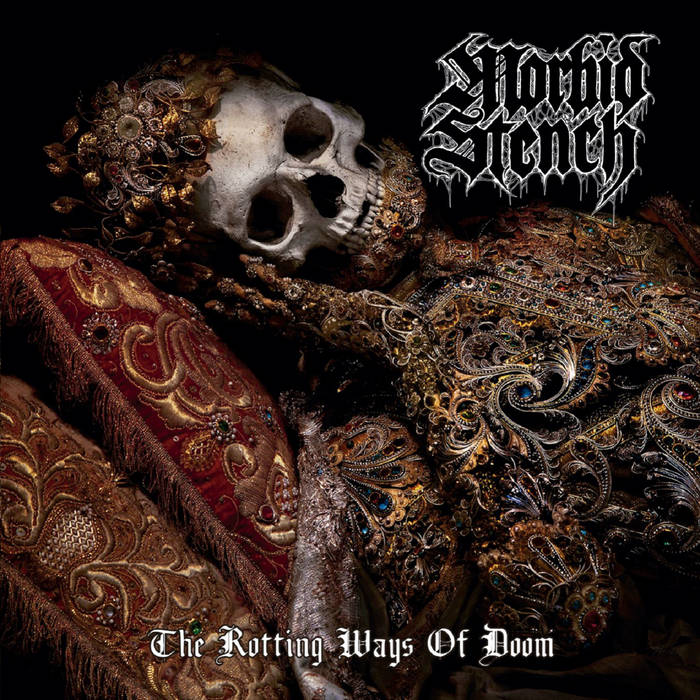 Morbid Stench is a collaboration of musicians from El Salvador and Costa Rica. Both countries have a predominantly warm and sunny climate, but when you listen to the music they have to offer, you wouldn’t exactly say that when listening to this sophomoric album. A deep, relentless, chasm-lurking kind of Doom/Death Metal with a penchant for heavy riffs and equally guttural vocals. In fact, the title of their debut album, ‘Doom & Putrefaction’ basically says it all.

The band’s brand of Doom/Death Metal sounds very Old School and refreshing at the very same time. A lot of Death Metal bands of today tend to get down into those cavernous sort of Death Metal, but with that they mostly focus on building massive walls of sound and usually that goes at the expense of its atmosphere. Morbid Stench clearly maintains its crushing sound, courtesy of a huge sounding production, but the band does not neglect to keep the ambience as well. The built-up contrast between the somewhat faster sections and the slow, lingering passages gives this album such an unsettling and unnerving atmosphere and, not unimportantly, it keeps the listener enchanted.

The Death Metal side of the band reminds me of Antropomorphia’s more recent records, but Morbid Stench manages to distinguish itself well by inserting almost Funeral Doom-like melodies, which it expertly weaves throughout the whole album. Morbid Stench definitely proves capable of combining the best of the worlds of Death Metal and (Funeral) Doom Metal into a highly effective mix. Their far more crushing sound allows Morbid Stench to firmly distance themselves from a more romantic sound of bands like Swallow The Sun, Shape Of Despair, Mourning Beloveth, Officium Triste or Saturnus.

The band’s debut album already was a fine exercise in Doom/Death Metal, but it still had this raw edge and a slight Black Metal feel to it, even. On this follow-up the band definitely took a huge step in terms of sound, song writing and overall musical maturity. Highly recommended.