Revel in Flesh – The Hour of the Avenger 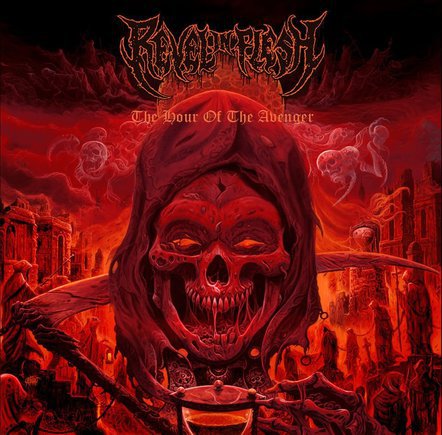 Revel In Flesh are rolling out the big guns and taking no prisoners with their no-holds barred 5th album titled “The Hour of the Avenger”, released via War Anthem Records on December 6th.

Revel In Flesh are from Germany and play Death Metal, not brutal Death Metal, not melodic Death Metal, not technical Death Metal nor any other subgenre of Death Metal but just good ol’ DEATH METAL. The songs harbor a collection of slow stomps, mid-paced romps, and fast cluster bomb explosions. There is a seamless merge of classic Death Metal and modern Death Metal brought together by the top notch playing. The harmonies on both the rhythm and lead guitars are the glue that binds each of the 10 tracks together into the juggernaut of death that is “The Hour of the Avenger”. Loads of hooks catch the listener and keep them reeled in for the 44 minute play time. There is even a Death Metal cover of Mötorhead’s “Rock Out”.

Revel in Flesh have released a solid album and it should be a late addition to a few album of the year lists. Bang your fucking heads. (Ted Gloom)