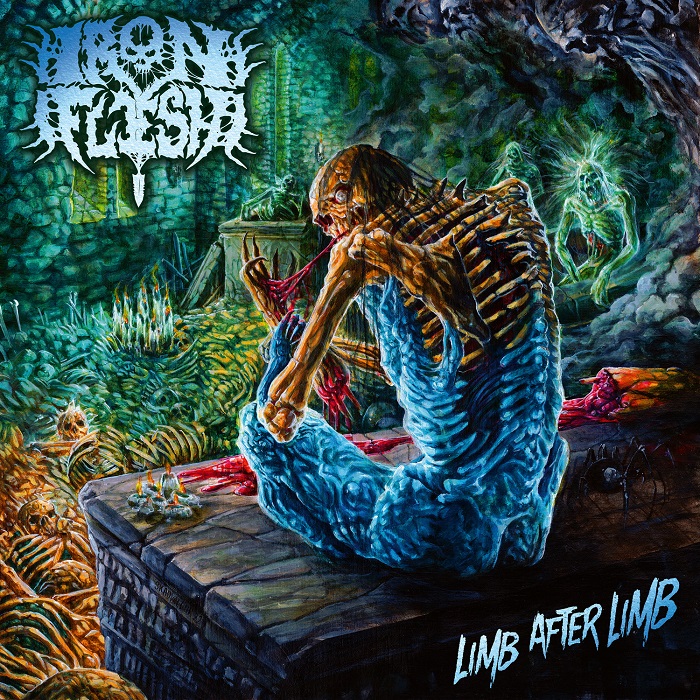 Highly thought of Bordeaux based Death Metal band Iron Flesh are one of a number of bands keeping the old school Swedish sound alive whilst constantly evolving to add their own flair and characteristics, and they complete a triumvirate of albums with the War Anthems Records released ‘Limb After Limb’, featuring eye catching artwork from Skadvaldur who has previously worked with Icelandic Black Metal bands Misthyrming and Sinmara.

When the press blurb said that Iron Flesh pay homage to the Swedish Death Metal scene I was naturally presuming it meant the early 90’s Stockholm/Sunlight Studios scene. That element is certainly represented throughout ‘Limb After Limb’ but I’d be remiss if I didn’t mention the huge slice of Gothenburg Melodic Death Metal influence that permeates the album throughout. Luckily, there is more than enough of the former sound to justify this albums inclusion on this hallowed fanzine.

In truth its a clash of styles that I think works really well, and Iron Flesh seamlessly combine hard hitting guitar leads with fluent melodic rhythms, whilst vocally Julien fuses his deathly growls with a touch of Thrash Metal influence and whole casket full of Gallic charm. Its certainly a fast paced release too, with intricate guitar solos interwoven between solid bouts of proficient drumming. On a personal level though I find ‘Limb After Limb’ to be a little too tame for my liking, expertly crafted and performed without a doubt, but the Old School/Melodic Death Metal hybrid whilst interesting doesn’t really peak my interest. It’s a very listenable album though regardless. (Marksson)