Mortuous – Among the Lost / Mors Immortalis 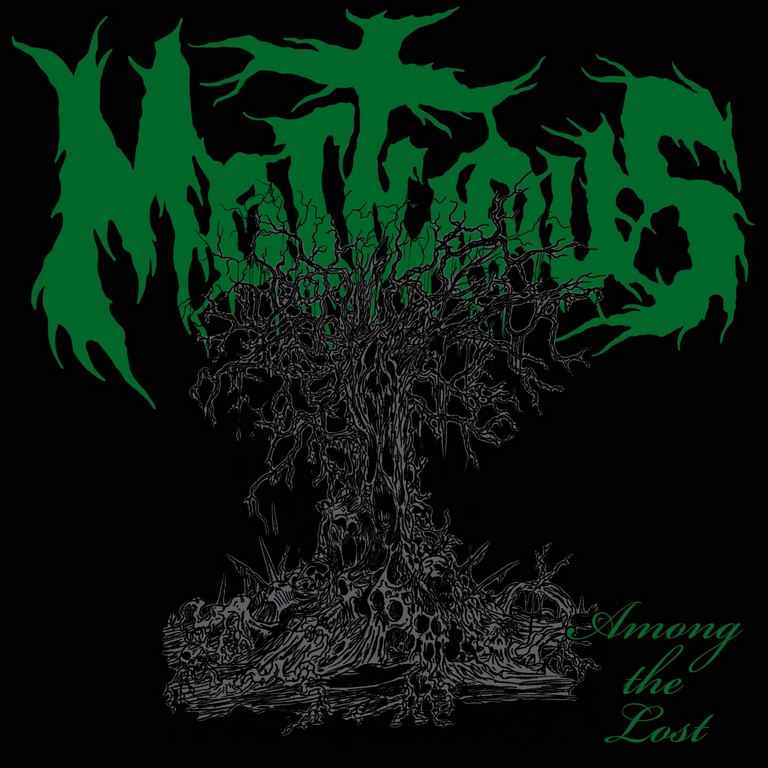 This year has already had an array of releases. With San Jose based quartet Mortuous, cover alone deserves a second look to check their music. At a glance, “Among The Lost / Mors Immortalis” has a collection of 10 tracks, with few being repeat titles. BUT what’s interesting is that “Among The Lost” a 2012 demo with 5 members and “Mors Immortalis” a 2010 demo with ONE member, Colin Tarvin, who did all instrumentals and vocals.

Artwork by Joe “Ravager” Romero, gives an inverted makeover which was previously black and white on “Mors Immortalis” and filled out on “Among The Lost”, this time giving a midnight background, emerald logo, and hollowed out smoky gray detailing of a dead tree with skulls being impressed into it, reminiscent of Morbid Angels cover to “Altars of Madness”.

One of the biggest influences you can hear is Deicide, from the cadence in Tarvin’s voice, similiar to Benton’s low gruff mixed with moments of aggressive shrieks. Guitar work by Mike Beams (previously Exhumed), also has similarities to the Hoffman brothers sound, like on “Obscured Animation” can’t help but think it’s reflected off “Carnage of the Temple of The Damned.” Comparing the compilation with each other, the difference is night and day. Let’s compare “The Eternal Return” from “Among The Lost”, the reverb on the recording is haunting with the intro, seeping into the track by 40 seconds and shifting the shrieks accompanied by swampy lows, additional members create layered dynamic to bring more power into their demo.

With Beam’s solo brings an additional needed touch of distorted magic that keeps you nodding in approval. When you hear “The Eternal Return” from “Mors Immortalis” side, guitar work is suggestive of Death’s  “Individual Thought Patterns”. Vocals are very coarse, recording is decent for being an individual doing it all. The tuning on guitar is a bit faded, and is hard to bring out the true elements of it all being in balance. It’s a bit off but for being one person doing it all, you gotta respect the effort they poured into it.

The last LP these guys released was in 2018, so perhaps we’ll see something new coming our way in the near future. (Tori Belle)