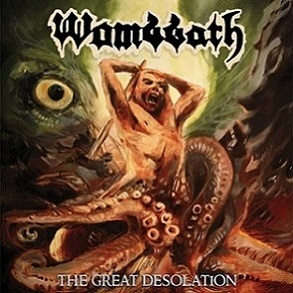 Another perfect meal of Swedish death metal will be served by Wombbath with their new album called “The Great Desolation“. This is the second album since their comeback and a real manifest of northern metal of death with your typical guitar sound, fat production, blast beats (something I loved about their sound since the beginning), haunting melodies, vocals from hell and a rumbling bass that causes earthquakes. They still deliver all the variations once again, using some Paradise Lost like melodies before changing into a neck breaking solo with a huge amount of heavy groove (something striking on this album), or a dose of straightforward brutality with blasts and up-tempo beats with powerful menacing vocals. Fantastic drum work filled with cool cymbal accents, fills and breaks and your groove artillery. The sometimes doubled vocals are brutal…loving it. There are even some killer Hypocrisy like moments in terms of melodies, grooves and structures in the middle of the album (highlight to point out here). The band continues to push the sound of the previous album even further, adding some newer elements and trying new things in terms of song writing. Great follow up of “Downfall Rising” and another album worth to be listened. (DPF)