Wombbath – Choirs of the Fallen 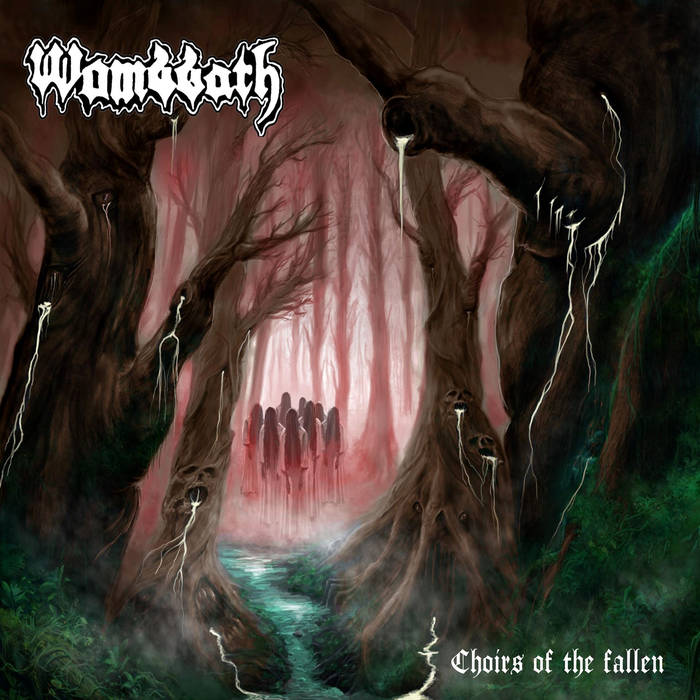 30 years of Wombbath? Congrats! Founded in 1990, the Swedish Death Metal Panzer fired the first time in 1992 with a demo, followed by an EP in the same year and then finally in 1993 a single and the first album “Internal Caustic Torments”, a cult/classic so to speak. They broke up in 1995, unleashed an EP before in 1994 but nothing happened any more. In 2014 they decided to shoot again, and succeeded well with their comeback album “Downfall Rising”, a brutal old school banger. Since then a couple of splits and another album, “The Great Desolation” came out, leaving nothing than dead bodies.

So right for the anniversary album nr. 4 is out and the blood can be spilled again. Brutal forward pushing tunes, smooth alternating between fast destructive nail guns and slow expanding toxic waste like in “A Sweet Taste of Death”. Thanks to the lead guitars, twin vocals or alternation between deep grunts and high screams the songs keep to be interesting and more dramatic so to say. Groove was always an important factor and as Panzer roll, so does a track like “From the Beggars Hand” have enough balls to shaken the earth (or genders). This track also offers some soft instrumental parts in the middle with a strong presence of the bass, cool move.

The second half of the record features a lot of the aforementioned ingredients and may sound familiar If you know their works but Wombbath got enough experience to add small things to keep the oil flowing, like in the “Void”, with an eerie beginning, some old school lead riff, hammer blasts, melodic guitar solo, drum fills and skull shattering heaviness!

They smash, they groove, they creep and deliver ghastly moments reminding of Entombed’s “Left Hand Path” (“Wings of Horror”). Swedish Death Metal the way I like it. The production blows everything away and is again very fitting. Towards the end they go big and unleash a catchy monster with the fantastic title “Choirs of the Damned”, spreading hooks and ultra heavy grooves (got to point out the vocals, great throughout the entire album). When I wrote the review for “The Great Desolation” I also mentioned some Hypocrisy-like hymn character and song structures and they can be found as well, like in the closing “In a Cloak of Anger”.

Fans of the previous works as well as Demonical or Bloodbath should have this already, old school straightforward fans or Swedish Death Metal fans should check it definitely.

Not everything might be new, but If innovation isn’t your first aspect you are looking for when listening but you enjoy good songwriting and old fashioned Death Metal (oh yeah!) then “Choirs of The Fallen” is the right record! Happy birthday Wombbath! Keep it going! To me their best record since their comeback, probably their career! (DPF)