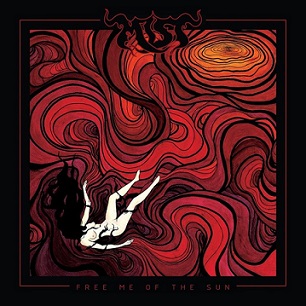 Mist are doomsters from Slovenia, formed in 2012. The now 4 women and 1 man released a demo and an EP prior to the now discussed LP “Free me of the Sun”. Their Doom is enchanting, full of heavy riffs, nice leads and a fantastic voice. The mixture of sounds reminds me somehow of Black Sabbath, a bit of Dio, Saint Vitus, with hints, especially in the vocal lines here and there, of Lucifer or Coven. The production is great for this kind of Doom. Mostly there is enough variation to not lead into boreness. Nina`s voice is killer and I think if the band is able to write some more of the catchier side of the album and to find some „own“ elements to make them stand out better, then we probably got a new classic. Strong debut and a promising band in the doomranks. Watch out. (DPF)