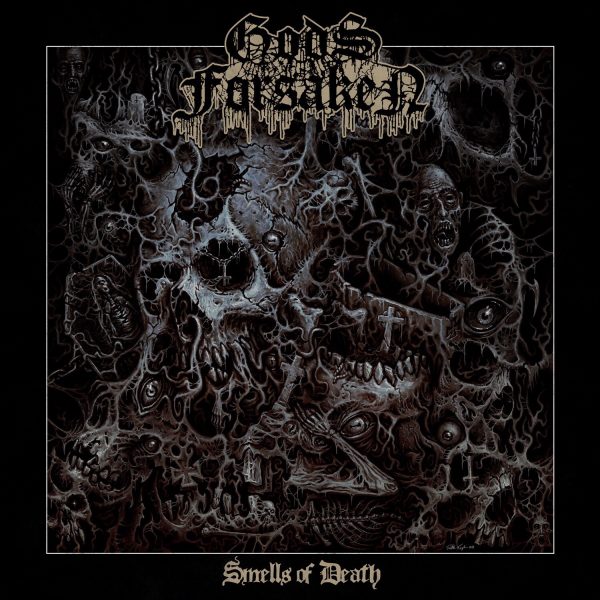 I remember writing my review for Gods Forsaken`s debut album, describing the veterans as solid in their making without being to innovative (do we need that in the end?). The 2nd album “Smells of Death” has a huge Bloodbath feeling, finding a good mixture between heaviness, morbid melodies and groove. The songs have more variation as some parts remain memorable and more stuck in the head. The atmosphere remains dark and like the title suggests, it smells of death.

The songs are flowing with ease, the production is crushing and the vocals are damn good as I like that deep powerful voice with understandable pronunciation of the words. The band does the transition from fast to mid-tempo very well, and that`s what I think they do best, changing speed from a brutal in your face part to a more darkened atmospheric oriented piece of rotten Death Metal. In the middle of the album you can hear the modern ways of writing extreme metal with an old fashioned sound while still remaining authentic in a way.

So, groove oriented SweDeath with a good sense for atmosphere and morbid melodies, heavy, crushing, dark…. a very good follow up to the debut. Fans of the Swedish way of metal of death should check this out, smells of death… (DPF)

The debut album, “In a Pitch Black Grave”, was and still is a pretty neat one if you enjoy your Death Metal crunchy, sloughy and heavy with a strong Swedish groove. Only 2 years after the debut, the beardy bunch (as vocalist Jonny Peterson has enough beard to cover up the rest of the band) recruited Gustav Myrin (Just Before Dawn, ex-Blood Mortized) and Alwin Zuur (Asphyx) as new guitarists to be on full strength to go to war.

Let me just shoot down your hopes right away, you will not hear something fancy, new, progressive or any other wankery. What you do get, you may ask…a punch in the balls, a kick in the cunt, a Wile E Coyote anvil…bought at Acme ofcourse…on the head and a boot in the face. That is what you get! The roaring buzzsaw guitars are a treat for the ears and for the gearpheliacs out there , Anders Biazzi mentioned they are not using the HM-2 pedal but the HM-300 one. Still, it sounding like those guitars need gasoline to get the work done. The variation of pace and riffs is a pleasant one, be it pounding mid-tempo grooves that reminds of Just Before Dawn and Hail of Bullets or up-tempo Golden Era Swedish Old School Death Metal along with leads that sometimes bring back some of the UK scene. During “Into The Pit We Gather” you will even hear a typical returning main riff that reminds me of one of Anders Biazzi ex-bands; Amon Amarth, something you can hear him play during “Victorious March” of the “Once Sent from the Golden Hall” album.

Gods Forsaken managed to create an album that is meant for the repeat button and is truly a wake-up call for every living soul who think the whole Death Metal the Swedish way category is oversaturated nowadays. (Ricardo)