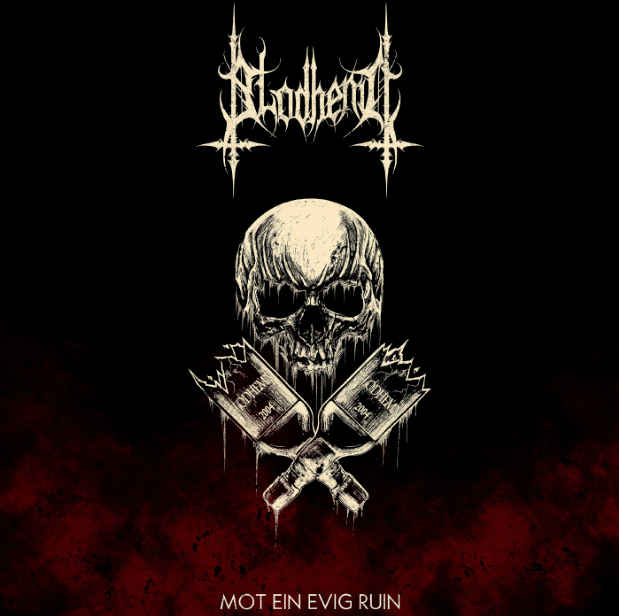 Blodhemn from Bergen/Fedje, Norway happens to be a one man band, which isn’t really a suprising fact when it comes to Black Metal these days. Since the inception of the band in 2004 Invisus has been the mastermind and musician behind everything put down as recorded material representing the band Blodhemn. Invisus also has himself a band of hired guns to help him spread the gospel of Blodhemn live unto the people. But for the purposes of reviewing an album, we will just forget about that live band stuff for the time being and just focus on the music held within “Mot ein evig ruin.” Which happens to be some really, really good Black Metal.

Black Metal you say? Why yes, Black Metal. Black Metal that is rather of a second wave style, based in “true” Norwegian Black Metal but with a understanding of variety and pacing beyond what most “true” things are. A sound that harkens back to the days of yore and intersects that with some ripping, thrashing riffs and some truly solid grooves to keep the whole thing a lot more fluid, dynamic and, honestly, interesting. Hell, I love Black Metal but too much of the kult “true” shit that just repeats for the most part can make my earholes bleed after to long. And I could listen to “Mot ein evig ruin” multiple times in a row, and have, and still enjoy the hell out of it. I could get technical, break it down and give comparisons and stuff but, to be frank, I don’t give a fuck. This is some fun, ripping Black Metal and it is some really good shit. Seriously, check them/him (live or on album form) out, you will not be disappointed. (Ben Schultz)