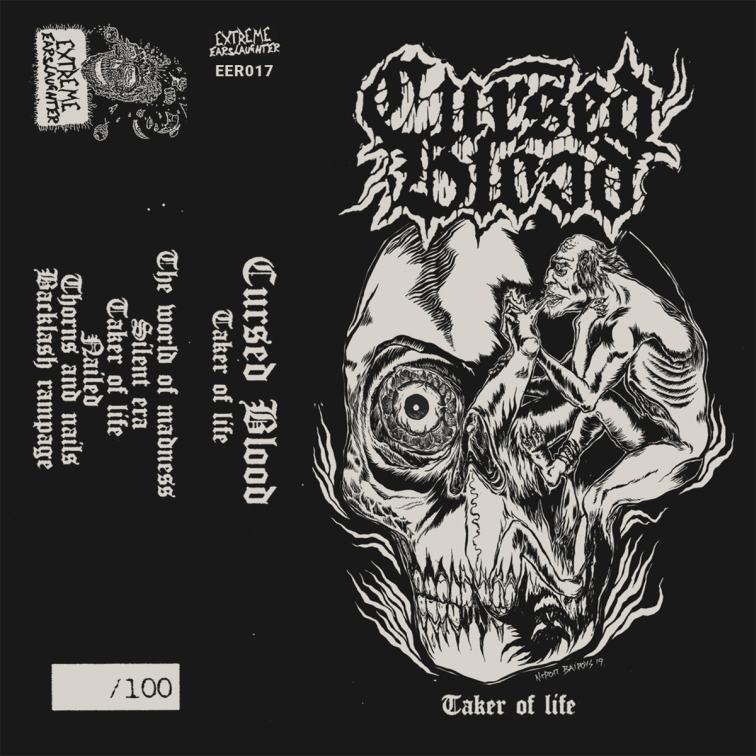 Athens, Attica, the main Greek peninsula, houses most of the major ports used by travellers arriving in Greece by boat, including Piraeus, Raphia and the “secret” port of Lavrion…And also Cursed Blood, a Death / Thrash Metal quartet.

This is their debut demo, released on cassette by Extreme Earslaughter and on CD by Katara Records, and if its released on 2 formats by 2 different labels and it’s just a demo, there is a possibility it is a very good one.

It starts with ”The World of Madness” that immediately takes you with catchy riffs and an initial solo in the most old Swedish Death Metal tradition with a voice that’s perfect for their style. It remembers me of Dismember but also At The Gates because it is rusty but screaming at the same time so it gives the music the precise tune.

Also we have a bass that is audible all the time. It has a very good pulse and makes its mark on each track. The drum work is good as well as it has variation, drumrolls and cuts that makes this demo a nice piece of dynamic Death / Thrash Metal. It has some blast beats but these are not long enough to be monotonous  as these are on the right place as well as each riff, solo or speed change. I’m sure this will be a classic Greek Metal gem on 10 years more…if we survive Covid-19 of course…

From my point of view Greece is more a Black Metal and Thrash Metal country but they are always revealing great milestones on Death Metal madness as well. I absolutely recommend to get this piece of insane Metal of Death, it will corrode your ears with nasty foam until you drown to it…So, wash your hands, face and neck, use mask, avoid crowded places and listen to fuckin’ Death Metal! (Gangrene Pus, digital demo version (14-05-2020))

‘War Anthem Records proudly presents the debut release of Greek Cursed Blood’- a typical press release statement for any debut release. However, those already exposed to these Greek fanatics, now surely know, what immense energy and spirt captured in their debut release. Those who still not exposed to their curse, some shattering surprises waits for them.

With such forces combined, the band released their debut, “Taker Of Life”, on cassette in 2019 through a small local underground label, Extreme Earslaughter. The tape sold out in a couple of weeks, and in early 2020 the band self-released a CD version through their own Katara Records. Very recently, Cursed Blood has signed a record deal with War Anthem Records and now released the EP “Taker Of Life”, which offers a mixture of Death Metal and Crust, which is straight to the point, crushing and damaging.

If the opener “World Of Madness” is a pure Death Metal grenade in the mid-tempo range, the next song “Silent Era” has a Crust club – which nowhere near silent at all. There is even more variety, which oozes out of the speakers as tough as lava. “Nailed” and “Thorns & Nails” then go back to the dead lead regions. Specially, “Thorns & Nails” can take anyone by surprise with its Grindcore style, and even to the chorus recalls the classic “Into Glory Ride”. The mini disc ends with “Backlash Rampage”, which again reveals a driving, almost thrashy sawmill. No doubt, “Taker Of Life” charged with Scandinavian characters, although six outbursts of anger captured here almost exactly in the middle of the triangle Death Metal (the islanders Grave and the Stockholm scene), Hardcore (Anticimex, Crude SS) and Crust (Driller Killer, Skitsystem).

With all that, this EP serves Death metal with a raw and crusty punk edge, which also wild, uncivilized and discernibly heavy. It was recorded at Ignite Studio by George Christoforidis, mixed and mastered at Nightbreed Studio by Costa Kostopoulos and features a cover artwork from Drop Virus. This debut EP will surely produce some ripple in the deep underground and let’s wish that, these Greek maniacs doesn’t just stay with the “Taker Of Life”. (Randolph Whateley, War Anthem Records version (28-11-2020))