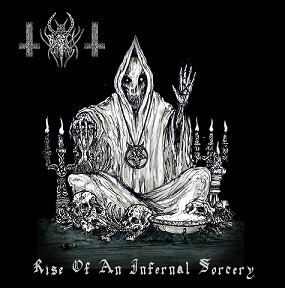 BlackHorns, originally from Oakland are a band, playing undiluted bestial black metal. Formed by Necrothorn they have been recording and refining their sound since their very first demo release in 2007. After releasing 4 demo’s and a split – they now offer us their first full length effort.

A sinister and foreboding introduction kicks off and erupts into an explosion of war black metal with “In Nomine Diaboli”. You’re in for a treat here. Imagine a mixture of old Beherit, the German Blood and no holds barred brutality, like the faster tracks from Mortician. Even bands like Impaled Nazarene or Archgoat  spring to mind. This gives you an idea of their style, without being a mere copy though.

Production has also improved on this recording. The bass is very audible, the drums sound real heavy and pounding. The guitar provides an abrasive sharp and heavy sound like it should be. Songs such as “Satanic Devotion”, “Ritual Chaos”, “Rise of the Infernal Sorcery” are played and performed in a seamless way. The overall feeling of the music is brutal, utterly beastlike, primal, dirty and violent. No fancy melodies. One can hear clearly the influence of Blood in the low, effected demonic vocals. It’s all frenetic tremolo picking accompanied by a thunderous, yet simple rhythm section full of blastbeasts, a very heavy bass ( like Mortician ). I mentioned Beherit as an influence – yet BlackHorns are faster and have a more Revenge-like  razorsharp guitar sound and no Sarcofago inluences.

Lyrics are about the usual topics of the genre : satanism, destruction, goat rituals, pentacles, the occult. There are tempo changes here and there, creating a much needed breathing point. But mostly,  the songs are played at breakneck speed.

To some extent – it’s linear music, composition wise – but done in the finest tradition of the genre. BlackHorns have succeeded in creating a genuine cavernous dimension to their music with this recording. After recovering from this assault, one is immediately inclined to play it again. In short : it’s for all you warmetal mongers who love to get blown away by fast sonic violence in the true 1990-ies bestial black metal style of old.

The CD version contains the Oath EP as a bonus and the music is even more abrasive. Just give it a listen. You won’t be disappointed. (LV)