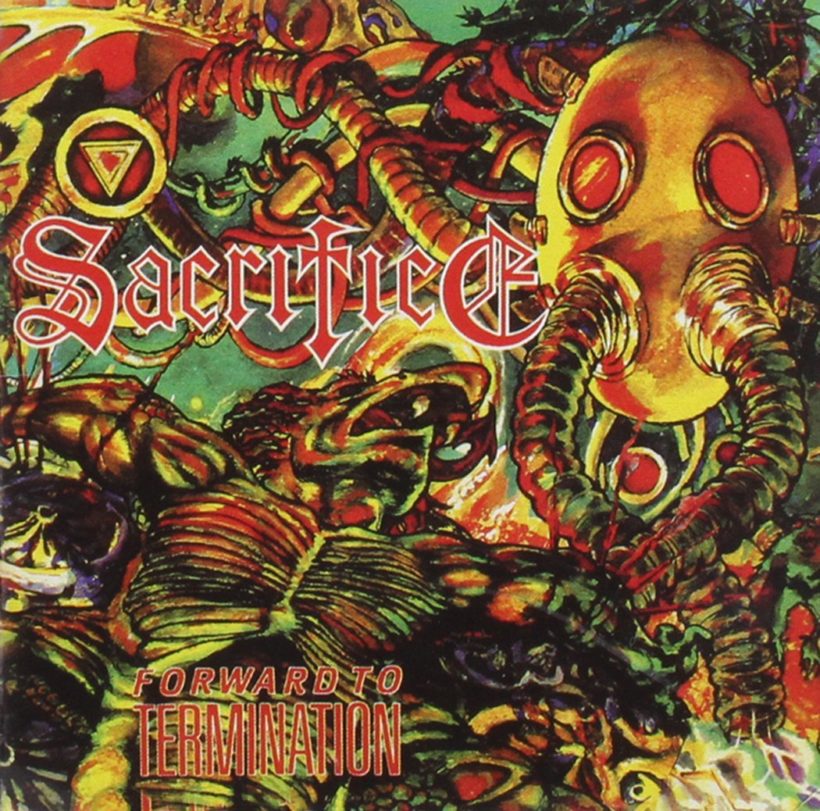 A much heard criticism upon the release of Canadian Thrash Metal band Sacrifice’s debut album, ‘Torment In Fire’ (1986), was that it sounded too much like Slayer. Something that with today’s ears is not all too easy to relate too. Of course, it was straight forward Thrash Metal, but not quite as evil sounding as Slayer did on their first two albums and not as ferocious as on ‘Reign In Blood’. But, that critique might also be seen in its specific zeitgeist, the metal scene back then was a lot smaller and more orderly than it is today, comparing bands at the time mainly came down to sounding either like Iron Maiden if it was melodic or like Slayer if it was fast and brutal. Anyway, on the bands sophomoric album, ‘Forward To Termination’, the band tried to get rid of that Slayer-comparison, which they managed to do to a certain extent.

Not only were they trying to get their song writing to another level, but sound wise they too chose a different path. The sound of their debut was also part of the criticism of many a metal magazine at the time, not infrequently, it was called a “messy Brian Taylor production”. That, also in today’s ears, charming buzzing guitar tone of the debut album has indeed been polished away on ‘Forward To Termination’, giving way to a much clearer and more in-your-face sort of sound. This new sound gave the band an even more straight forward and aggressive sound. Unlike some of their compatriots, such as Voivod who went to pursue a more technical and progressive sort of Thrash Metal after their debut, Sacrifice was basically going for the kill.

While this may sound like Sacrifice sold their souls for disbanding their primal sound, it worked out pretty well. Though band and press wanted to get rid of the Slayer comparison, they kind of underwent the same sort of transition. Going from a rawer approach in their formative years to a much more violent sort of sound. In that respect, ‘Forward To Termination’ may have become Sacrifice’s ‘Reign In Blood’ against all odds.

With ‘Forward To Termination’ Sacrifice might have distanced themselves from the early Slayer comparison and clearly took a different musical direct from Voivod’s increasingly more complex take on the genre, they did creep close to that other compatriot: Razor. Their newly adopted style: a riff-heavy, angular sort of Thrash Metal that focussed on speed and hooky song writing. Compared to their debut they really took a step forward in terms of song writing. While it was definitely charming what they were able to present on ‘Torment In Fire’, that sloppy sound and equally wobbly song writing is traded for a tight riff-fest that lost all comparisons to Hallows Eve, Rigor Mortis or Sodom. Instead Sacrifice moved to a sound that was more akin to Bay Area Thrash Metal, it is more than once that you’d be able to discern hints of bands like Exodus or Testament (then still known as Legacy by the way), listen to ‘Forever Enslaved’ and you’ll definitely be able to pick out the resemblances.

I personally always have regarded ‘Forward To Termination’ the band’s finest moment, and for the most part I still do. But over time I have grown to appreciate ‘Torment In Fire’ as well, but regardless of how you look at both of these two early Canadian Thrash Metal classics, you can’t see them as anything other than simply underrated if you place it in the global scene. So, if you haven’t been able to get into Sacrifice yet and if you have a soft spot for that fast-forward sort of Thrash Metal without all too much complexity, but with excellent song writing, you should definitely give ‘Forward To Termination’ a shot.