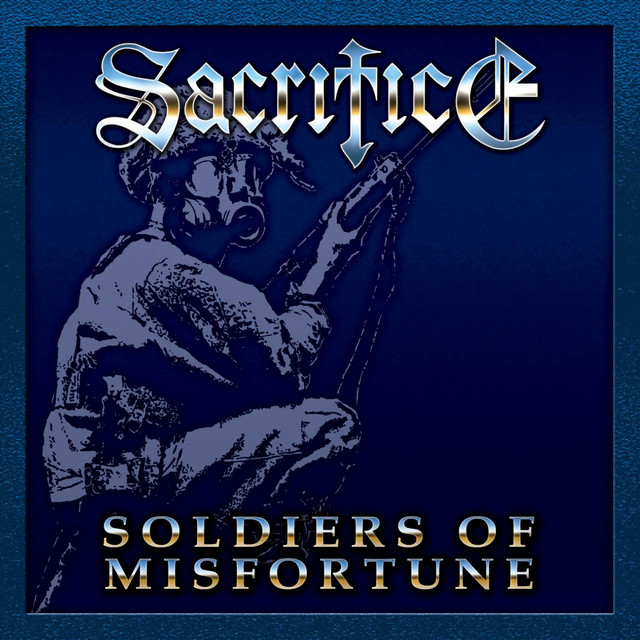 After a raw and musically slightly naïve start with ‘Torment In Fire’ (1986), which basically featured all of those 80’s evil Thrash Metal aesthetics, Canadian based Sacrifice went on to a much more in your face direction with their sophomore ‘Forward To Termination’ (1987). They had opted for a Thrash Metal sound that was not so much akin to that of early Slayer, instead a more solid and sharp edged furious kind of Thrash Metal. With this move, they had come closer to bands like Razor, Lääz Rockit, Heathen and the likes, Thrash Metal that’s in for the kill. In 1990, when Thrash Metal was already in global decline and Death Metal was slowly but surely taking over the throne of extremity and brutality, Sacrifice came with their third offering: ‘Solders Of Misfortune’.

The musical path that they chose to take with ‘Forward To Termination’ was pushed further, which allowed them to get much more into ‘real’ musical territories. While ‘Forward To Termination’ still echoed a bit of their earlier, and sloppier, roots, none of that is left on ‘Soldiers Of Misfortune’. The band had certainly taken a next step in terms of recording quality and musicianship: the album has a furious energy and possibly Rob Urbinati’s best vocal delivery. It has that furious driving force that divides the more melody based Thrash Metal bands and those who are purely riff-driven.

Yet, while still pretty much high on riffs, on ‘Soldiers Of Misfortune’ Sacrifice sounds more melodic than ever. Making them sound quite a bit like a little brother to bands like Heathen, Forbidden or even Exodus. Take a listen to ‘Existence Within Eternity’ for instance, it is almost impossible not to draw comparisons to Exodus’ earliest records. In fact, of all of Sacrifice’s albums, ‘Soldiers Of Misfortune’ tends to lean the most on those American Heavy Metal licks, think Vicious Rumors or Helstar. The leads and more melodic riffs allow the band to sound more versatile than on their previous two records, yet without losing anything from their pace and killing instinct.

The question which album of Sacrifice was their finest hour led to a lot of discussion over the past decades. As always it depends a bit on your personal taste and point of reference. While it is fair to say that all of those three first albums are classics within the Canadian Thrash Metal scene and that the two records that came afterwards, ‘Apocalypse Inside’ (1993) and the reunion album ‘The Ones I Condemn’ (2009) were hardly able to touch the same quality.

So, to answer the age-old question, whatever Sacrifice album to pick depends on whether you like that raw 80’s Thrash Metal energy (‘Torment In Fire’), heavily riff-based, raging Thrash Metal (‘Forward To Termination’) or a fast Thrash Metal with a tad of melody (‘Soldiers Of Misfortune’). Pick your choice.