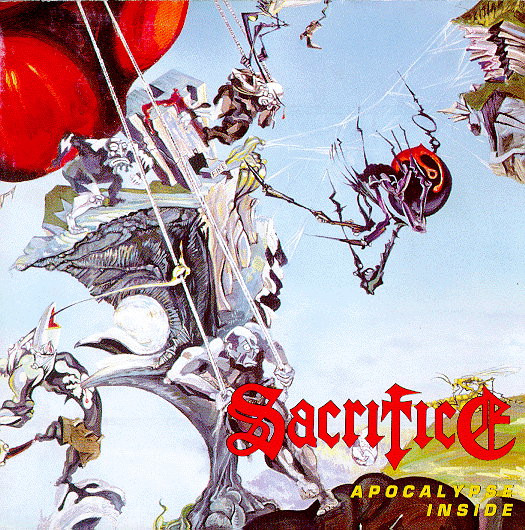 Halfway through the first half of the 90s can be seen as the time when the Death Metal genre was already on its way out and Thrash Metal with acts like Pantera and Machine Head made its first steps towards ‘modern’ metal and certainly no longer had that lethality of the late 80s. Many bands from that 80’s Thrash Metal scene had since quit or had sought a more modern sound and thus sounded either a lot milder or a lot more modern – or even a combination of both, take ‘Force Of Habit’ by Exodus as an example. It is against this background that Canadian Sacrifice released their, what would later turn out to be, last album, ‘Apocalypse Inside’.

Listening back to this album it is not surprising that this was their swansong, not only the musical environment had drastically changed, but the band itself too. If you were to listen to all four albums in chronological order, you would hear a band in motion that has a different sound on each album and is looking for ways to reinvent themselves. On this swan song the band sounds more technical than ever and clearly seeks the challenge in more complex song structures and experiments with tempo changes and convoluted riffs. At the very same time they clearly opted for a more accessible sound, which led to a kind of contrasting result: on the one hand Sacrifice went on the road for delivering their most complex and sophisticated album, but they seemingly also wanted a sound that would appeal to a wider audience with cutting off the sharpest Thrash Metal edges and also the vocal venom is less deadly than before. The result is an album that is far from bad and still offers an enjoyable listen, but it feels like it is kind of stuck in limbo. That especially shows through songs like ‘Beneath What You See’, ‘Ruins Of The Old’ or ‘The Lost’, which all sound a bit unsteady and directionless.

Right after its release, the band threw in the towel, leaving a legacy of four albums to the Thrash Metal scene. Some of these albums can rightfully be considered classics within their own genre or within their native country of Canada. Yet, I always felt that the band was searching for the right sound, busy trying to assign themselves a place in the scene, instead of listening to themselves and just doing what they were good at: playing ultra-fast, angular Thrash Metal with extremely fierce vocals. Now the legacy is mostly one that caters to the enthusiast, not a single bad album, but also not one that stands out head and shoulders or can compete with the greats of the genre. In any case, ‘Apocalypse Inside’ is an album with nice riffs and good musical ideas, but whose execution is too mellow and mild. Close, but no cigar.