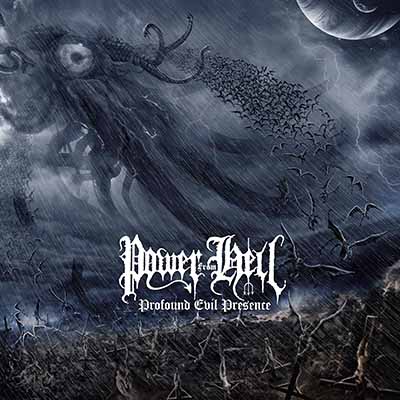 It was storming out, a real downpour; the kind that makes you worry about the tall trees over your home. The rumble of thunder off in the distance grows closer and closer. Flashes of lightning temporarily blind you, their jagged edges slicing open the blackened, purple sky. You nervously glance out the window, as the reflection of one power station after another exploding catches the corner of your eye. Is this…the apocalypse?

Nope, it’s the new album from Power From Hell. You must be thinking, man, with an opening like that, this one’s a home run! Ehh, not quite. More like that’s what I would have written if this album had lived up to its potential. You may feel differently though, so read on and find out!

These Brazilians have been around since 2001, and “Profound Evil Presence” is their 6th full-length (only the first one I’ve heard, admittedly). As I understand it, they’ve been moving steadily toward a more black metal sound, which explains why the 11 tracks here are just that; blackened thrash, emphasis on blackened. Most of what Power From Hell delivers here is safe, accessible, headbangable mid-paced black, thrashy metal, almost in the vein of latter day Immortal (or current Abbath, take your pick). The only ‘negative’ word in that previous sentence was ‘safe.’ Because it’s playing it safe that derails this album. I listened to it at least 5 times before putting pen to paper so to speak, and every single time my mind wandered roughly 2/3 of the way through the album, lulled into a trance from most of the songs sounding similar to one another. Now don’t get me wrong, there are some really great moments within. “False Puritan Philosophies” winds its way around your spine, and jagged riffing pairs with a thundering rhythm section carries you with it until done. If Johan sang on this, it could be an Amon Amarth song. “Unholy Dimension,” which may very well be the strongest track on the album, uses a driving rock beat to nail home an undeniably hooky earworm melody and is sure to be a live staple with its fist-pumping, devil horns-throwing goodness. “Elizabeth Needs Blood” is a stomping, thrashy gem that sounds like it was written in 1987. By Dissection. All the highlights of the album share one thing in common: kick-ass riffing, catchiness, and strong vocals from frontman Sodomic, who’s reverb-drenched lower register and well-enunciated barking calls to mind Abbath again.

BUT (there’s always a but), there aren’t enough of those highlights. More than a couple songs felt long and plodding, and a few of the others felt interchangeable in their same-ness. The worst culprits are often the choruses, which are frequently nothing more than the song’s title, repeated ad nauseum. “Profound Evil Presence” isn’t bad, it’s just unmemorable, and a mediocre mix doesn’t help its cause. Diehards of what is best described as a mixture of the first two waves of black metal will find more to like here, and it wouldn’t be the worst choice to introduce someone to the style, but I don’t foresee myself revisiting this one. There are others plowing this same field who do it much better. Soft pass. (Crimson Death)