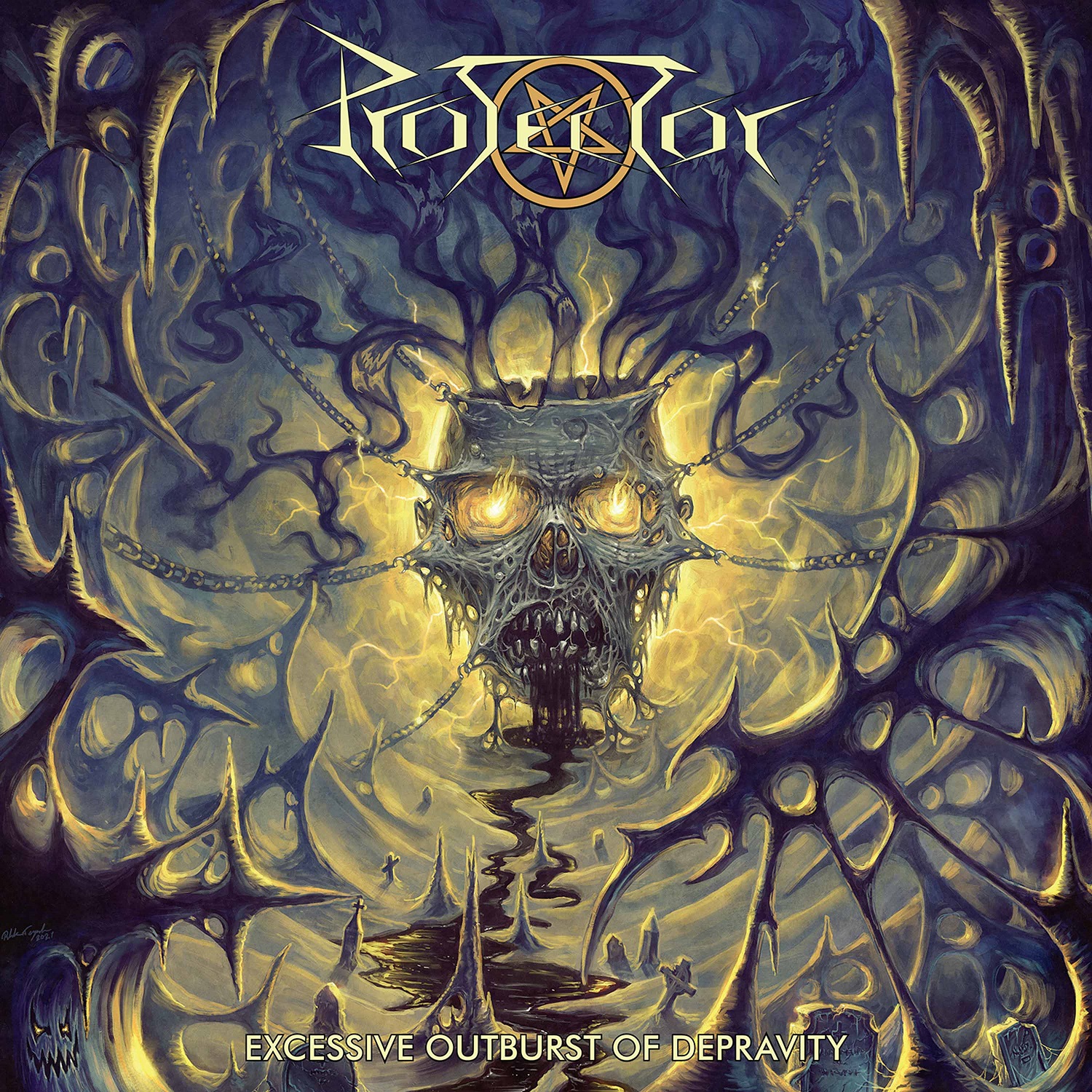 The history of Protector is a rather messy one, with lots of band members getting in and out of the band and also a few break-ups (or not, depending what source you are trusting) and now going strong in the right Napalm Death-style: with no original members left. But, most of all, Protector was one of the many German Thrash Metal bands that were never able to gain the widespread acclaim of Kreator, Sodom or Destruction. Yet, with their far more brutal style, nearing Death Metal even, they had quite a bit to offer to the headbangers of the late 80’s and early 90’s.

Based on the very first recordings it is fair to conclude that Protector remained largely a very much overlooked and underappreciated band. They might not have had the catchiness or the label back-up of some of the bigger German Thrash bands, Protector had a largely unique sound that only had some American peers in the likes of Sadus and maybe Dark Angel – but Protector always had a far more primitive style, but with a similar aggressive and wild drive. For me personally their ‘Misanthropy’ EP from 1987 and debut album ‘Golem’ from 1988 are total classics of German extreme metal, with the follow-up albums ‘Urm The Mad’ (1989) and ‘A Shedding Of Skin’ (1991) only following closely after.

Protector’s return was a peculiar sequence of events. During the 90’s guitarist Marco Pape kind of kept the band alive, but wasn’t really able to get anything going, except for an obscure demo in 2000. Despite all his efforts, the band finally folded a few years later. The years that followed were only marked with a hand full of various compilations. But in the meantime vocalist Martin Missy, who moved to Sweden, had his own sort of Protector cover band going, ‘Protectors’. In this form they were featured on the Hells Headbangers released ‘In The Sign Of Sodom – Sodomaniac Tribute’, alongside bands such as Bestial Mockery and Suicidal Winds.

It might quite not be a mere coincidence that Martin Missy teamed up with members of exactly Bestial Mockery and Suicidal Winds to write and record a new demo in 2011, ‘The Return Of Thrash And Madness’ and definitely marked the return of Protector.

But although ‘Excessive Outburst Of Depravity’ already marks their fourth album since their return, as many as in all previous years, from 1986 to 2003, I always had the feeling the band kind of lost touch with their initial roots. Still, those albums garnered pretty good reactions from both press and fans. Under Missy’s leadership and with the band’s mainly Black Metal-oriented members, the band lost its Death Metal-tinged sound and was traded for a more Black Metal sound. Perhaps logically, but the transition was somewhat difficult, but seems to have been successfully implemented on ‘Excessive Outburst Of Depravity’.

In a few years and with a few albums, the band transformed from a deathly Thrash Metal band, not too far away from a sloppier sounding Sadus to Black/Thrash Metal band that bears most resemblances with Deströyer 666. It has those same sort of catchy, fist pumping, wild Heavy Metal-tinged hooks, choruses that invite roaring along to and a great production that offers the album’s dynamics in speed to come to full fruition.

Although I still prefer to give ‘Golem’ or ‘Urm The Mad’ another spin, I think that ‘Excessive Outburst Of Depravity’ has become a very decent album and is able to compete with some of the best in the genre. It might not come as a total surprise to see Missy sporting Nifelheim and Venom patches on his battle jacket in recent photos. This comes recommended for fans of ‘true’ metal, so Nifelheim, Desaster, Deströyer 666 aficionados take notice.