Hellish – The Dance Of The Four Elemental Serpents 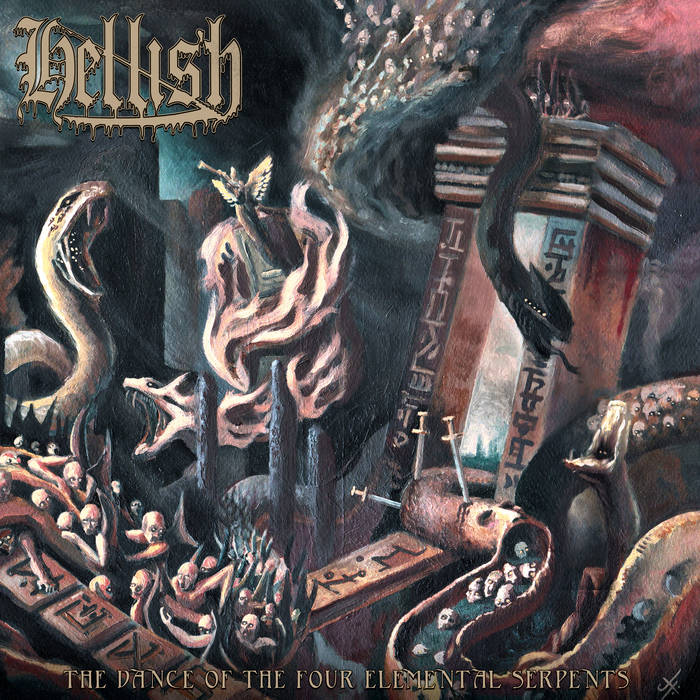 Earlier this year the Chilean Thrash Metal band Hellish already released a sneak preview to their new album in the form of a digital 2-track EP. Through those two tracks the band made clear they were up for a more Black Metal oriented musical direction on their third full-length album.

Though the band always had a bit of Black Metal edge to its music, it is getting increasingly apparent with each subsequent release. Hellish did not betray their initial roots of Sarcófago, Destruction, old Sepultura and Possessed, but they’ve added quite a lethal dose of sharp sounding Black Metal to its mix. Making it sound very much like a band such as Aura Noir on their classic ‘Deep Tracts Of Hell’-album, yet Hellish never sound as violent or aggressive. Instead they still have this classic very Heavy Metal-tinged undertone that makes it a little more melodic compared to those Norwegian Black/Thrashers. Just take a listen to the great ‘Goddess Of Death’, which has some nice guitar lead work, but not anything flashy, so it still fits perfectly with its ramshackling sound. That sound, though, is remarkably clear, making the riffs stand out pretty well, but at the same time also leaves enough of a raw edge to keep its dirty character. The slightly reverbed vocals are also still very much present, giving it a nice and authentic mid- to late 80’s sound.

On ‘The Dance Of The Four Elemental Serpents’ Hellish did what they were set out to do, delivering a very decent slab of Black Thrashing Metal, sure to please any true 80’s headbanger. Fans of the early works of the bands mentioned above might consider checking Hellish out, if they have not pre-ordered the LP from Dying Victims Productions already.