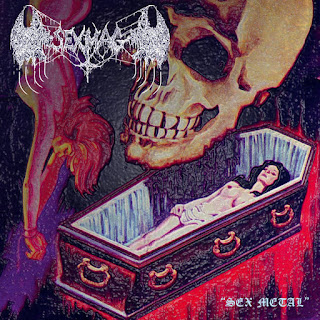 A band with such a name immediately draws attention, add to that this fantastic cover artwork and you have yourself a great cult hit. You don’t need more, do you?

In these cases the music is often of minor importance or at least does not have to meet the highest standards in order to please the crowd. After all, all you need is a crate of beer and your bullet belt to make this a huge success. Whatever you think is the case with this band, these Polish pervs at least know how to throw a party. They throw everything they like on a big pile and crank out five songs in just under half an hour, which are also neatly introduced with an intro and finished it off with an outro. Otherwise, this is just incredibly catchy Blackened Speed Metal with a hint of Thrash here and there or maybe even a stray Old School Death Metal riff. Whatever you want to call it, basically this is just sweaty bare chested, 666 screaming and atrophied beer-drinking filth. A great adoration of old Polish metal also rings through, the influences of Kat, Dragon and even Wolfspider, for instance, are unmistakable. But old German (Proto) Thrash and Speed Metal are also audible, including the “somewhat” out-of-tune high-pitched squeals. To answer that one question: is it grandiose? Hell no. Is it any good? Fuck yeah! Every now and then, those records come along that manage to strike that right chord in sleazy rattiness, charm and sheer spontaneity. Similarly, ‘Sex Metal’ fits the bill with the likes of Norway’s Black Magic and Canada’s Gatekrashör for instance. So, I’d say put on ‘Sex Metal’ and crack open another one of those cheap cans of beer. 666! (FelixS)