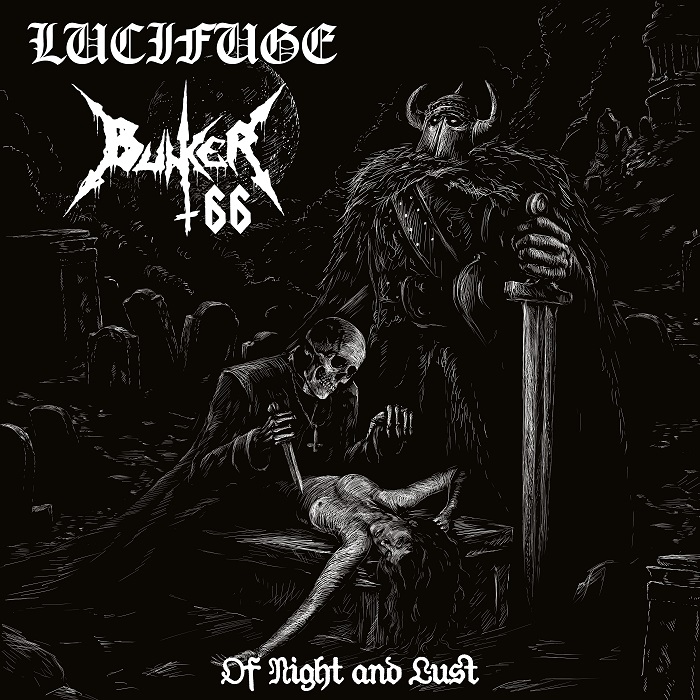 We are about a month away from the unleashing of an evil looking German-Italian alliance, the likes of which have not been seen since the 1940’s. That’s enough of the war-puns. (Sorry I’m British, it’s in-built) Two bands who specialise in anti-religious Black/Thrash, Italian (Sicilian to be exact) necro triumvirate Bunker 66, and unholy Bremen quartet Lucifuge combine to produce six bouts of short, in your face gnarly Blackened Thrash, and Dying Victims Productions have being kind enough to package the resulting chaos in a rather nice looking CD and LP!

This has been a year of awakening for me, a year where Black/Thrash has taken root in my dark soul through bands such as Devastator from right here in the UK, and US band Blasted Heath. Now it seems I am to add Bunker 66 to my every growing list of Black/Thrash highlights as the groove laden tones from opening track ‘Mellhammer’ pull me straight in to their filthy riffed, banshee shrieked orbit! So much to enjoy from the Bunker boys, from fast flowing guitar leads, gnarly intricate solos and to top the whole thing off, a superbly executed cover of Motorhead’s ‘Doctor Rock’ just for good measure! Bunker 66 may be influenced by such catastrophic occurrences as nuclear war and the pitfalls of organised religion, but their music is a feast of rhythm and blues meets Motorhead meets 80’s first wave of Black Metal, and is such is rather a fun experience!

Lucifuge actually started life as a traditional Black Metal band but have since progressed to adopt a more Black/Thrash sound. I’d say its a progression that suits them nicely, and they kick into their half of the EP with the raw vocals and blitzkrieg drumming of ‘In Blood & Dust’. That being said, you can still hear a far more Black Metal edge to the bands sound, especially compared to Bunker 66, and whilst the previous band were all fun grooves and riffs, Lucifuge have a hard hitting edge to their sound, complimented by some excellent song-writing that leaves their tracks sounding more layered and of greater depth. Indeed, through ice cold guitar leads and punishing bass play as well as some excellent technical solos, Lucifuge’s half of the split carries a really venomous bite to it.