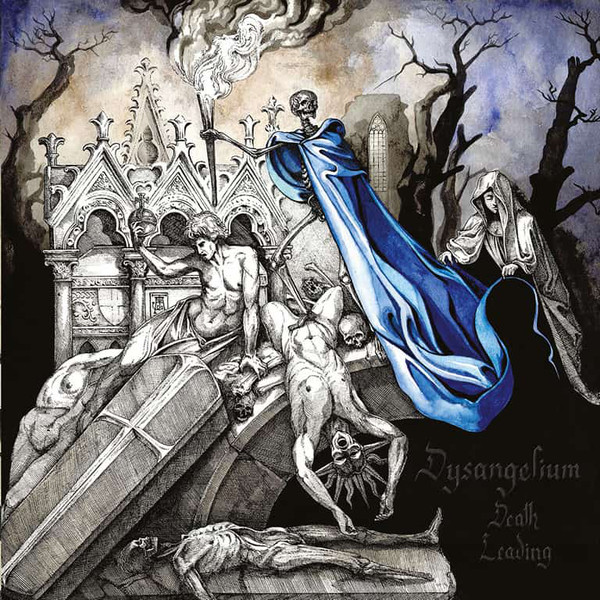 Dysangelium are a Black Metal band from Germany that belongs amongst the new stars on the European Black Metal firmament. Even if they haven’t released tons of records already, the quality studio and live wise says it all. Together with band like Ascension or Chaos Invocation, they are one of the most important pillars in German Black Metal!

5 years after their first album “Thánatos Áskēsis” and 4 years after the split with AIN, they’re finally back with their 2nd full length “Death Leading”. The beautiful art by José Gabriel Alegria Sabogal already shows a majestic, divine approach of death leading mankind into darkness.

The productions is natural, crispy, well balanced with a strong and powerful bass that, compared to tons of other releases, is much more prominent and plays a key role into their sound and in some of the best Black Metal releases of the last decade. The production is improved generally compared to its predecessor.

Music wise, the entire spectrum of speed are used to create interesting songs. Breaks and tempo changes are placed effectively, and like the song “The Great Work” says, the songs are written with the purpose to create a dark, divine, entrancing atmosphere, reminiscent of the mid/late nineties with a slightly modern approach a well suiting overall concept. The melodic guitar work is amazing and reminds me of the aforementioned compatriots or some killer bands like Acherontas, Nehëmah or early Altar of Perversion. The vocals are clear plus, the main vocals are extremely remarkable and stand out amongst the masses. The spoken, clean ones deliver some extra sauce to the stellar meal. Speaking about great vocals and songs in general it’s hard to pick one. I recommend to listen to the entire albums, as it works best as such. Not only, but thanks to the initial riffing and construction, “The Great Work” is probably the strongest track of this masterpiece. It has it all and even more. Supreme feeling, darkness unbound showcased through diversity, catchiness, just Black Metal greatness.

I spoke about the bass earlier, and I just would like to let you know and pay attention to the basslines. Pure gold. Listen to them separately and then again in the overall sound and you will know way the bass is more important than thought and how it can be used. An ode to bass players.

And with “The Great Work”, the band has lead into their second half of the record and here they go all in and show their potential even more with epic Black Metal hymns of the highest degree (again those vocals, those lead guitars, that bass AND the fantastic song oriented drumming).

This is deathinitely (ha) their best work so far and a Black Metal gem, amongst the best of the decade. I will end this review with some lyrical content from “Through Henbane Nebula”: