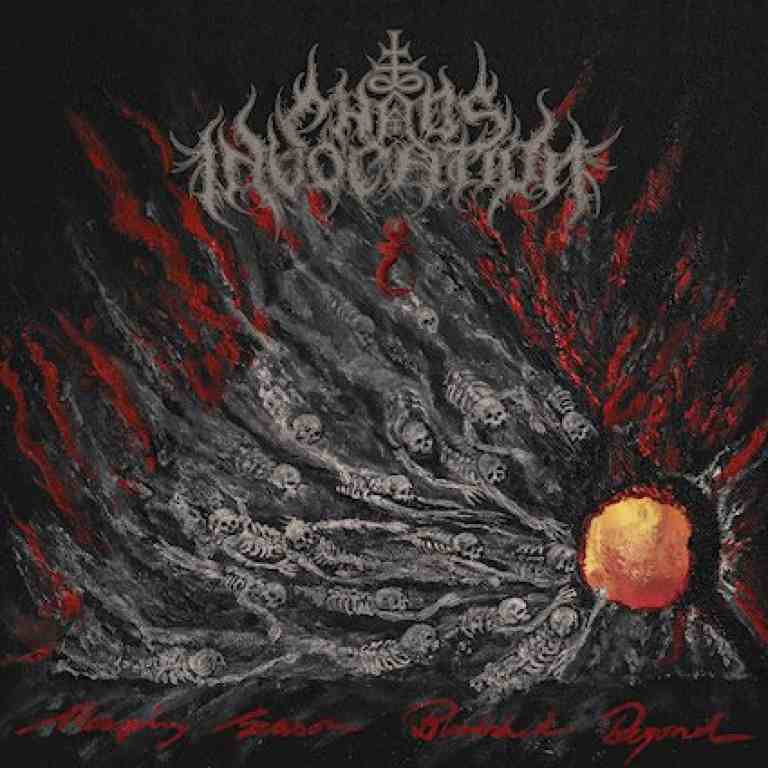 Chaos Invocation is a well-known name in Black Metal, especially after their second album ‘Black Mirror Hours’ which combined heaviness, darkness, chaos and beauty in a perfect way. Everything was right at the point. 5 years, a split EP and a compilation later they finally release their new opus ‘Reaping Season, Bloodshed Beyond’ through W.T.C. Productions. The production goes further where the previous album ended, which means everything in the mix is well balanced, the drums are fat while not overproduced, the guitars have this crunchy tone and the bass has enough space and gives bottom to the satanic litanies. Speaking about vocals, there is everything again….Raspy shrieks, deep grunts, spoken words and  choral chants. Not a word is out of place, not a technique placed wrong. The tempo variations are amazing as it goes from doomy gloomy to high octane blasts. Once a bit chaotic, sometimes more heavy metal than black(and this is something they incorporate with such ease that most bands would easily fail.) Chaos Invocation knows how to create a dark and oppressive atmosphere and still can be catchy as hell. There is a lot of nineties Black Metal in it, first and foremost on the melodic side of the genre which is something the Dissection fans would like. I recommend to listen to this more than once because there is so much going on, so much to absorb. Every lead guitar, every drum stroke, every word spoken, every second of this album. Patrick W. Engel did a great mastering as well and Ceethava provided a perfect artwork for this album. Contender for album of the year.