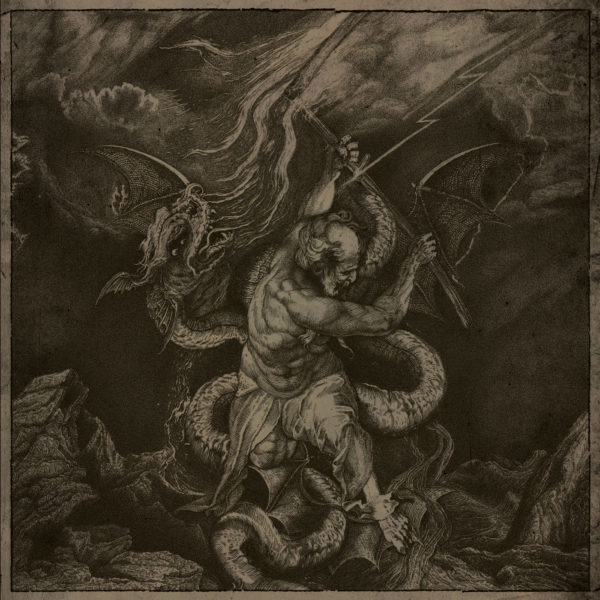 A already interesting release right announced for January is the newest album of Barshasketh. The now in Glasgow located black metal band (originally from New Zealand) has spent 4 years working on their 4th album, in between a split with Outre was released, which turned out to be a self-titled album, namely “Barshasketh”. Mostly recorded, mixed and mastered at Necromorbus Studio so you can surely expect an adequate sound for the songs and so it is. Visually Artem Gregoriev did an excellent job with his almost woodcut style of drawing.

The songs itself are a continuation of their path from its predecessor; a good alternation of fury and embracing darkness. The drum department knows how to change beats and mix all up with tasty fills when needed without killing the band. The bass plays his key role in the background, giving bottom from hell with little accentuations when necessary. The guitars change face with killer power chords, tremolo picking and single chord/string playing which is a typical Black Metal thing. Barshasketh have a good sense for morbid melodies when required, allowing the listener to sink deeper into the sound and giving a little extra to the riffcarpet. In the middle of the album clean guitars make their appearances, which I think is a good choice. Also thanks to the drone sound in the background and the ritualistic tom laden drums that kick in to create a dark haunting intro of what`s to come. The shrieking vocals, maybe somewhere between Black Altar and a raspier version of MGLA (yes, really raspier) has enough flesh on the bones to be an important factor as well. The almost Attila Cishar like singing thrown in in the aforementioned song is a good example. Right after northern blasts reign supreme, bringing forth a Dark Funeral like atmosphere of frost and bitterness, not to mention the clean vocals that appear in the background. Strong moment of classic Black Metal here. The song receive the right changing spin to let the listener breath with a more midtempo headbanger for the second half with a prominent bass as main melody with labirynthian guitar work until it fades out.

Barshasketh vary their speed and ingredients in time to keep it fresh. The next song starts slowly melancholic just to erupt in a blastbeat artillery which masterfully alternates to skanbeats with nice twists on the drumwork and riffsection, something of good craftsmanship. The midsection presents a Dark Funeral/Watain like part, just more twisted…sick. Right here the song goes back into high dynamic territories with clean guitars, cymbal accents and a Slayer (“South of Heaven”) like construct with phenomenal leads and an even better drumwork (…that beat…). Propably Barshasketh`s most epic songs all in a row. 90`s Black Metal beamed into the modern times. The thrashy Emperor-esque progressive nature on the seventh song are ridiculous, it is just morbid greatness.

At the end of the album Barshasketh swing the hammer of damnation and deliver their most intricated work on the album, a typhonian maelstrom of luciferic verses and litanies, all packed into puzzle like Black Metal which, thanks to its songwriting skills in terms of variation, shows the entire cosmos of Barshasketh. From slow melancholia to headbanging epicness, fury unleashed and forward-thinking without forgetting the past. Each instrument has its outstanding parts here, well intricated into one woven net of dark hymns of metal of black. Great ending in an ambient part which slowly fades away like sunlight does when the queen of the night is calling. I consider to check this out if you dig BLACK metal. (DPF)