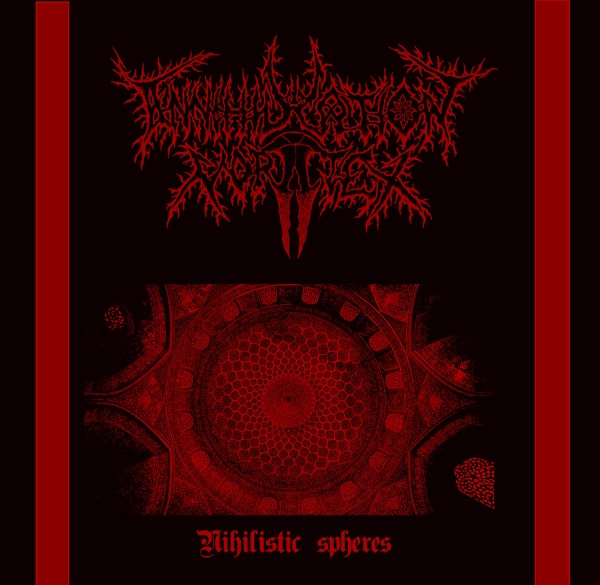 Quick glance at the cover and logo of the band and first that comes to mind is that this will be another War Metal album. I couldn’t have been more wrong. To my surprise we get old school Death Metal in vein of the Swedish one with some minor Black Metal elements here and there. Swedish Death Metal you say? Think of Grave, Dismember, Unleashed or Vomitory during they best years and you will have your answer. It’s even more surprising as people making that project come from quite well known but still underground bands on Polish Black Metal scene, which are Martwa Aura and UR (two different faces of Black Metal but both really good). Apparently deep in the black souls there is need of playing something different but still old school in its core.

“Nihilistic Spheres” starts with a short intro, some strange chants mixed with screams and at the end sounds of bombs dropped from plane and guitars coming in just at last seconds of it. That gave even more impression that we will get fast and furious War Metal. As “Mortal Madness” kicks in, all delusions are gone, because when melodic guitars start to play they stay for the duration of whole album. You would think that melodic and brutal Death Metal don’t go together on one scene? Think again. Annihilation Vortex knows how to make it work and although all the great melodies they don’t forget what should Death Metal be about. So don’t fret, it’s not another In Flames or Children of Bodom.

Annihilation Vortex found the perfect balance between underground on “Nihilistic Spheres”, meaty Death Metal sound and really good memorable melodies that aren’t to “sweet” and nice. Just listen to “Shrine of Death”, “Mortal Madness”, “Let the Nothingness Consume Us!” or title track “Nihilistic Spheres”. The amount of memorable riffing in those tracks could easy fill full albums of few other bands. And I’m quite sure that the big names of the Metal scene wouldn’t detest those track and gladly would put them on their own album. And still here and there we get this specific Black Metal influences which resembles another Polish Black Metal group which is Mgła or UR which is quite obvious as there are people from that band (UR, not Mgła) are playing in Annihilation Vortex. And this kind of melodic Black Metal fills the music perfectly. You can hear those parts in “Let the Nothingness Consume Us!” and “Nihilistic Spheres” two best tracks on the album.

The whole album lasts just below half hour mark. Which is a perfect time as we don’t get really long and boring tracks and after finishing it I gladly pushed play again and again. “Nihilistic Spheres” is really good album which stays in your head with its melodies. I suppose choosing well known and respected but still underground label was done on purpose.

l think that with material like that they wouldn’t have any problem getting a big contract with big label. So more respect for the guys for that conscious step. Too sum it up, take your hard earned money and support the band and label, it will be money well spent. (Sulphur)