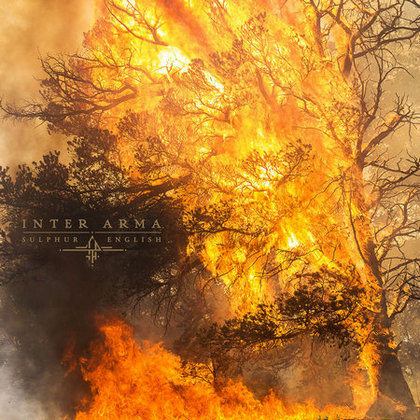 There are plenty of mysteries in life to think about. UFO’s, ghost’s, why my snare sounds like shit, AND HOW THE FUCK INTER ARMA CAN WRITE THE MUSIC THEY DO! Seriously, they are just in a league of their own. Always have been since their debut album, “Sundown”. They also gave us classic albums such as, “Sky Burial” and “Paradise Gallows” and all of them stand the test of time and always will. “Sulphur English” is no different! However it is different in a way from the others I mentioned are it’s actually in a nutshell a little more straight forward but not so much to where it feels like a different band. There are still spacy interludes, Shamen like chants, stunning cleans,  and fucking godspeed like drums. I mean seriously if you’ve ever seen the band live you know just how crazy the madman T.J Childersis is and he doesn’t slow down at all on this.

The introduction to the album is a slow burn, “Bumgardner” that sets the mood with an ominous build into a massive slab of a riff that fades out into nothingness and then, “A Waxen Sea” overwhelme the senses. The dense cavernous riffs fill out the edges while the vocals and drums keep things in order in a rhythm pattern that they just can pull off like no other band out there.

Getting down to, “Citadel” the single off the album. You are absolutely crushed with slow morbid angelesque type riffage and yes you read that right. This whole song just KILLS everything in its wake. Think a stampede of elephants running through the forests. No grand interludes of psychedelic riffs. No clean singing. No fucking around. Kill everything in your wake when this comes on. And lets not forget the solo that starts fast and gets into the harmony and then a CRUSHING EVERYTHING IN ITS WAKE RIFF. By far one of the more heavy songs that the band has ever done.

The album organically grows with each passing moment with and songs like, “Stillness” will have you in a kaleidoscopic trance, and songs like, “The Atavist’s Meridian” that is consciousness-expanding but also driven by insanity that is Inter Arma.

All in all this record is an example on how to write your own music and execute it well and by well I mean could be one of the best bands to ever write music period. It transcends music to make it a living breathing organism that is Inter Arma. As of right now, this is my Album of the Year. Everything about it is great from the atmosphere it creates to the riffs that they deliver. And I would HIGHLY suggest seeing these guys if they are ever close to you, you’ll thank me later. (JonG)