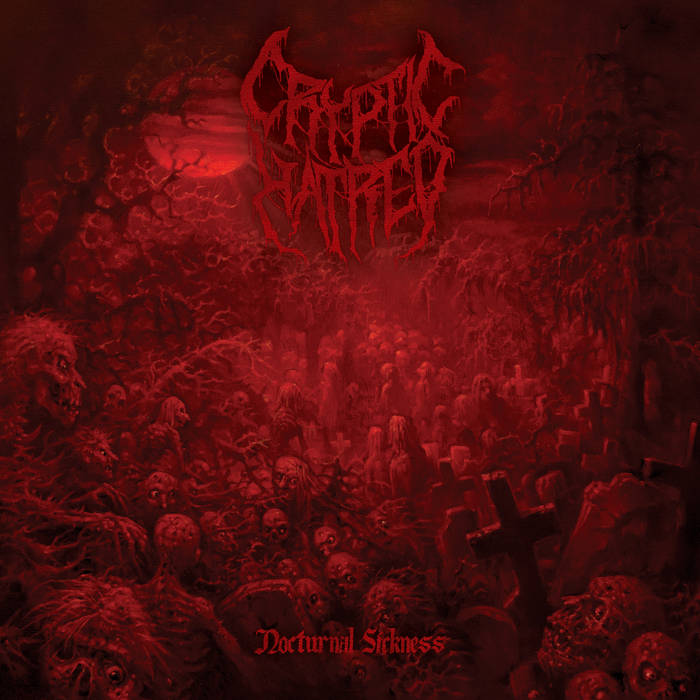 The artwork for the debut album from Finnish Death Metal band Cryptic Hatred is superb in every aspect, from the details to the colour, as well as the intricacy and intensity. It certainly makes you want to sample the horrific delights within. ‘Nocturnal Sickness’ has received the full works when it comes to the release; being put out on all formats through two labels, The Other Records and Desert Wasteland Productions. Two of the band members, namely guitarist Jami Lamio and fellow guitarist and vocalist Eemil Lajoma, both play in Death/Grind band HappoSurma, so despite this being a debut album with only the ‘Free from the Grave’ demo before it, the band come into the album with previous chemistry.

There is no time for easing into ‘Nocturnal Sickness’ gently as Cryptic Hatred are quick to flick the switch and delve head first into some fast paced dominant riff-age. Blending an old school influence with a more modern sounding brand of Death Metal, Cryptic Hatred make use of some gnarly sounding breakdowns, mesmerizing guitar solos and an ever present punishing drum pattern to create maximum carnage. The vocals of Eemil Lajoma are thick, meaty and deep growls that for the most part are spat and barked out at great velocity. Bassist Miska Hagelberg keeps up with the drumming bombardment by laying down his own pattern of rumbling devastation, and even finds time for the odd bass solo here and there too.

I’d ay the real power on this album is the guitarists though. When the pace heats up they sound ravenous, and when things are slowed down they let their creativity flow with some epic solos, thundering riffs and some intricate rhythms. As a whole album ‘Nocturnal Sickness’ is more than listenable, and whilst it doesn’t offer up anything particularly fresh, its brutality and deeply grooved heaviness more than make up for that!