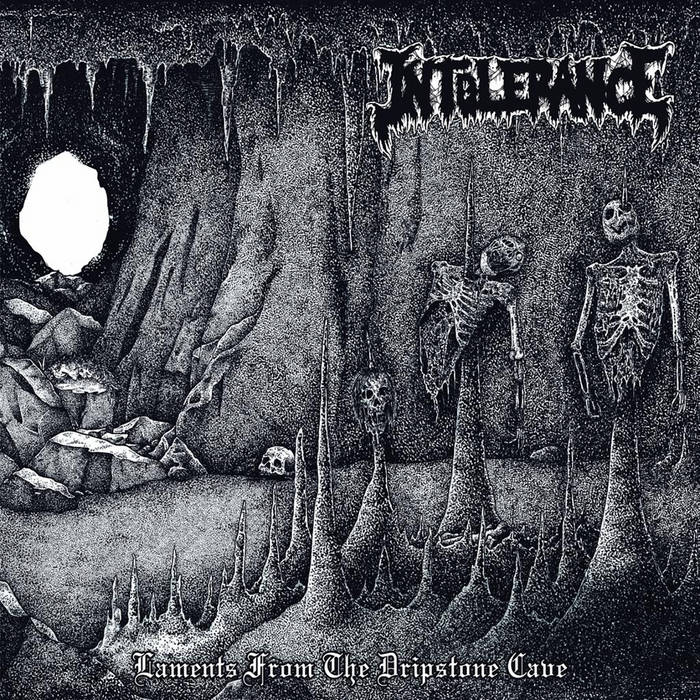 With a title like “Laments from The Dripstone Cave” how could anyone just possibly walk past this release from Spanish Death Metal mongrels Intolerance. That’s right, unless you are some sort of weak arsed flower sniffing pansy that prefers the sound of birds chirping in the morning to the kinds of noises that often emanate from the graveyards and darker places of the world, this alone should draw you in like a pack of flies to a corpse. Or maybe I’m just a sicko, meh, I’m fine with that.

The sounds that we have emanating HERE from this particular dripstone cave are exactly what I’d hoped they’d be. Opening with the perfectly creepy and well titled “Intro” to give you an old school nod in the direction they are headed, Intolerance then bring the heavy to the table with a capital ‘H’ with “Morbid Creations,” which as expected contains lashings of gurgling nastiness fit to sit the mood on offer to perfection. Yep, this is Death Metal kiddo’s, the kind of stuff that reeks of festering piles of guano and half rotten cadavers that slowly secrete their bodily fluids into the murky stinking water that forms into pools of gore at your feet as you listen. No flowers in here, no sunlight to take away the chill, only death and decay and foulness in their purest forms.

Each song on this seven track offering continues this level of utter ghastliness, and this for fans like myself is a good thing. “Lamentations” and “Crypt of Sorrow” are particular highlights, with the latter containing the type of pulsing drive and D-beat awesomeness that will make even the fingers of the recently deceased want to tap along on their coffin lids, and as a whole package this one is pretty hard to beat. Sure, there are many other bands out there that are similar, but when this kind of thing is done with genuine sincerity, we are all winners in the end are we not?

I’m pretty sure by now that you have the general idea what to expect, so now the choice is up to you to have a listen, and decide if the sounds of suffering within are up to YOUR expectations. Unlike the Book of Lamentations in the Bible, this one won’t bore you to death with nonsensical rantings at all, it will kill you in far more sinister and exciting ways, and I highly recommend that you give it a spin! (The Great Mackintosh)