Xasthur – Telepathic with the Deceased 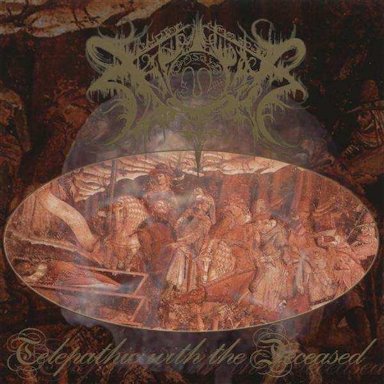 Xasthur’s “Telepathic with the Deceased” is already his fourth album and Malefic seems to have a very creative black metal mind. Since this year has already seen two releases and there is more to come from different labels as well. I for one don’t mind at all as quality always prevails above quantity in Xasthur’s case. Question is can he live up to his own standard this time around? The answer is the following review. It took more time to digest a Xasthur release than ever. Maybe cause I heard so much already from Malefic I’m more focused on the progress in compositions and differences with previous work than on the atmosphere it tries to suck you in.

A synth intro called “Entrance into Nothingness” opens the door to what the title already suggests. “Slaughtered Useless Beings in a Nihilistic Dream” welcomes you in and is a pretty uptempo song, though frantic and restless. What is noticeable is that it’s a bit clearer than before, ok it’s still blurred and distorted and a background hiss is still there, but someone did his best to master this release. It is more dreamy, simpler, more aestethic in terms of flowing compositions and more styled than before, cause it’s more audible. (Except for “Murdered Echos of the Mind” which could be easily placed on The Funeral of Being or Suicide in Dark Serenity). It could be a bloodlet for atmosphere, but that’s not the case as is obvious with “Abysmal Depths are Flooded” and “May Your Void become as deep as my Hate”. How much desperation and hate in a, mind me, euforic way can you handle? Xasthur shows he doesn’t have to hide in pure distortion, atypical guitarlines and deliberatly creating murkiness to craft songs out of his unconscious. Main question still is, if it lives up to the expectation. You could expect a progression or is Malefic’s hart staying true to his own created style? The latter is the case here, so real progression cannot be heard other than that it’s a bit clearer productionwise. Another question raises if it’s that important? Enough bands stick to their own style without really changing it. Other bands do, but I guess it’s not that time yet for Malefic or he is not willing to. Than again, I cannot forsee the steps he will take with upcoming releases, nor do I really care. I’m addicted to his creations, but still can honestly say this monster is as ugly as ever.

Not uglier or better as I maybe expected, but still does the trick very well with it’s more slower and simpler approach to his personal trademarked burzumically droning audible horror. This nicely done limited lp version offers some bonusmaterial on side D in the form of two rehearsal tracks and a cover of Judas Iscariot’s “The Cold Earth Slept Below”. A nice bonus addition, but not that relevant. That’s my major point of criticism, other than that I have to wait and see what he comes up with next, when everyone expects progression.

To end, if you like his earlier work, this one will take you on a dark, painfull and agonizing trip into a moody ambience of despair as well. If you’re unfamiliar, I guess this is a good one to start listening to as it’s a bit more easy to get into than his other releases. (Jeffrey)