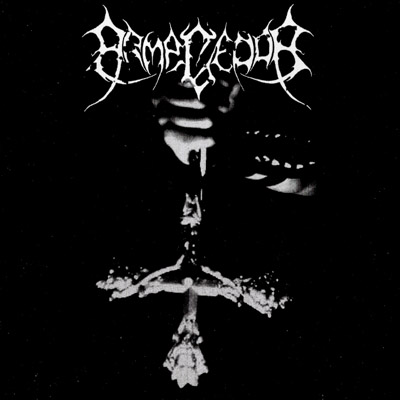 October last year I reviewed the regular LP version of “Only True Believers”, what I’ve got here is the picture disc version of that same LP. Since Armagedda’s birth the band is going stronger and stronger and gets more recognition in the scene each month. And their last full-length “Only True Believers” pushed the band even further, yet without losing its integrity and their beliefs. Although the band changed their sound a little they got more popular with this last album, and now about five months later Agonia Records from Poland released it on picture disc as well. So, picky people can choose from all kinds of formats now. But I’m pretty sure that the regular LP (released through From Beyond Productions) is sold out for it was released in 666 copies only. And the chance that this version is sold out by the time you read this is reasonably high.

Anyway, for the real Armagedda maniacs, (vinyl) collectors or sleepy blackmetal fans who missed their LP this picture disc version contains an additional song called “The Night Of The Triumphator”. Indeed, that is a Satyricon cover that was originally released on the split CD with Enslaved called “The Forest Is My Throne/Yggdrasil”. The song is put in a more blackened version than Satyricon originally did and reminds on Darkthrone, just like most Armagedda songs. The cover is a nice addition to your collection, but it also looks very smooth with a nice lay-out and ‘cover’. But, I guess this is more of a thing for the collector, and if you consider yourself a collector, you’d better hurry for this one is even more limited and just printed in 200 copies only! (FelixS)