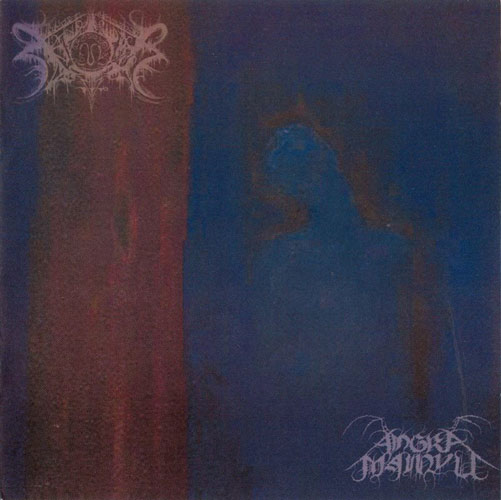 When I first heard about this split I immediately ordered it, because Xasthur is one of the most interesting Black Metal bands around at the moment. This US one-man project of Malefic released in the past few years already some of the finest pieces of most desolating black metal you can imagine. With his typically way of using guitars; repeating riffs, fingerpicking melodies, depressive tunes, sometimes it even sounds like they’re played out of tune, yet it all fits perfectly in the songs, Malefic creates the perfect soundtrack for a slow and bloody torture of the whole humanity. Which is strengthen by his ice-cold screams, painful and overflowed with hate. Again the 4 song of the Xasthur part of this split are exactly as we’re used to hear, yet without getting bored for even one moment, actually the longer I hear the music of Xasthur the more I get into it. Like on all of his releases I can make some comments about the production of the music, not everything is produced as good as it could be, but fuck it, that’s the beauty of black metal. With a clean production most of the raw black metal releases will be as dead as God himself. Xasthur is just one of the few original sounding underground black metal bands around and I just can’t get enough of his music. Songs like “Soul Abduction ceremony” and the great Wigrid cover “Ort der Einsamkeit”; which is in my opinion even better as the original, are 2 of the most depressive yet purest pieces of Melancholic Black Metal you can imagine.

The other six songs on the split are for Angra Mainyu. I’ve never heard from this band before, so this was my first acquaintance with this band. Also from Angra Mainyu we hear depressive, raw black metal, which isn’t bad at all, yet after the devastating part of Xasthur it becomes clearly that Angra Mainyu only stands in the shadow of Xasthur. Despite that the 6 songs we hear from this band aren’t bad at all, the burzumish guitar-riffs are great to listen too and the songs doesn’t bore at all. Some riff and tempo changes doesn’t flow over total flexible and not all is played without some slight hitches, but all by all Angra Mainyu is an interesting band to keep an eye on in the future.

This release is a great split with 4 amazingly desolating pieces of melancholic black metal from Xasthur, one of the best USBM bands around at the moment, and a welcome acquaintance with Angra Mainyu, a magnificent band which did an excellent job on his part of the split. (GeertVM)