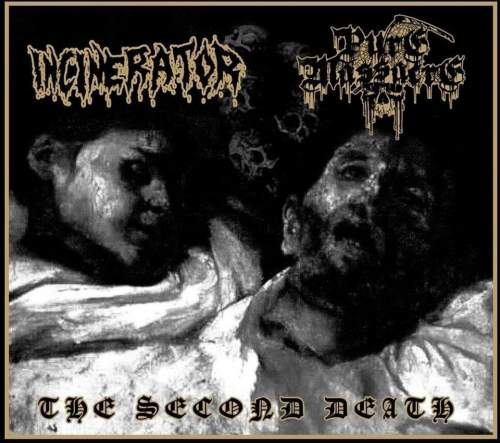 This new split effort featuring Incinerator from Poland and Pure Massacre from Argentina, is a demonstration from two  different bands, from two totally different worlds and scenes, with only one goal – to infect the world with true Death Metal.

This is more or less the explanation or liner note, as it is featured on this beautiful split Digipack.

So, what do we have here? Incinerator kicks off with a Slaughter cover from the “Strappado” album, named… “Incinerator”. It is to say – a cover. The band manages to drive this song through a meatgrinder. It hasn’t been so vile since Christ Denied  from Spain mangled the “Overlord” song from Infernal Majesty. And believe me, this puked out rendition of Slaughter is even worse. The other two tracks reveal a very extreme, dirty gore-drenched type of filthy Death Metal, as if we were back in the 1990-ies. Let’s say… a butchered Pungent Stench, for example.

Pure Massacre from Argentina: perhaps a bit less extreme in nature, but still very nasty, disgusting and utterly provoking in their own way. And they fit in nicely aside Incinerator. Three tracks of rancid South American Death Metal, ripped out of the jungle and chopped and regurgitated in a way it was meant to sound – at least, for some people.

No clean sound, no glossy production (although everything sounds crystal clear), vocals that seem to emerge from a busted toilet and meaty, Goregrind influenced Death Metal, with the emphasis on “Death Metal”.

Personally, I kinda like these filthy outbursts of undiluted extremities.

Fans of Christ Denied, the Turkish Cenotaph, old Pungent Stench, Disastrous Murmur and other guttural, low rumbling Death Metal lunatics, feel free to give this one a listen… at maximum volume. Too bad it’s only a presentation card with 3 tracks from both bands.

Pray to the Gods of Gore for full lengths.

Rating: a maximum score, given the old school vibe and the audacity to perform such extreme Death Metal. Drinks are on me, folks. (LCF)