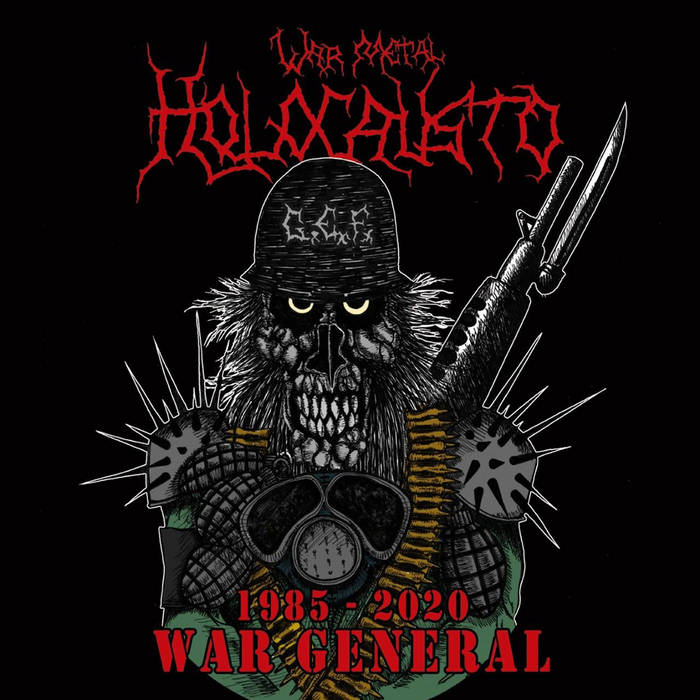 Not an easy birth, considering the shit storm that has accompanied this release.

According to Valério Exterminator: “There is a possible judicial dispute looming between the old vocalist and him. Despite the confusion, it was not Valério who ended the band, but the original line-up had fallen apart. Valério declared that the line-up was dead and continued as Holocausto War Metal, which has been raising confusion if they are active or have split up.”

That’s the statement according to the band. I smell a well-oiled propaganda machine behind all this.

In the end, it all comes down to the music. Let’s cut through the bullshit and listen to the 4 new tracks, shall we?

The EP kicks off with “Feb Respeito”, a typical ominous intro of some old sound stock footage, referring to Winston Churchill & filled with patriotism and chanting while bullets and grenades are flying all around.

“ISIS” is the first real track – it starts slow, doomy and menacing in a pure Sarcofago fashion before it deploys itself as a cluster bomb full of primitive, sloppy and rather lo-fi Black/Death/Thrash Metal executed in the true Holocausto vein.

The band keeps it down to the foxhole. No fancy hipster fringes hanging out of their music – just plain brutal and martial grinding and bashing with raw militant vocals. It does have a juicy “fuck off” attitude, I must admit. Blast beats emerge and shoot shrapnel all over the place. whenever they needed and for the rest, it is heavily leaning on those adorable Holocausto riffs as can be heard on the other two tracks, “Sniper: Alvo Na Mira” + “Crianças – Soldado”.

It can hardly sound more “South American” than on this EP. The band reformed in 2004 and have been terrorizing their old and new fans with their trade mark Brazilian ‘War Metal” antics ever since.

Too bad there’s only 11 minutes of Belo Horizonte Eternal! (as they call it themselves) on this release because “War General” has never sounded so fucking authentic and deliciously addictive since their 1987 “Campo de Extermínio” debut.

The childish S.O.D. cover art could have been better. Then again, who gives a flying fuck anyway?

Holocausto are alive and kicking. This EP was meant to be played REAL loud, so knock yourself out, folks.

A full score for Holocausto and never mind any collateral damage. (LCF)