Ceremonial Decay – The Crescent and The Cross [EP] 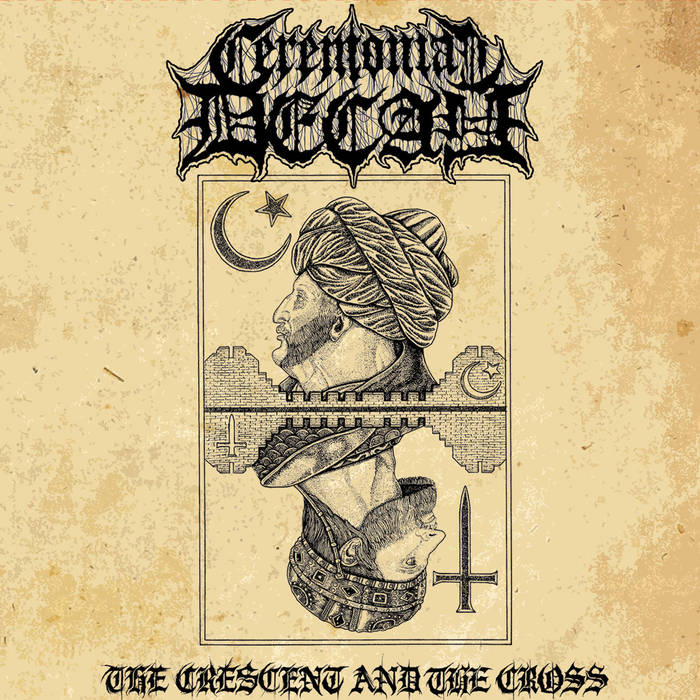 This year the impressive Transylvanian Recordings has put out on cassette the debut EP for Los Angeles Death Metal four piece Ceremonial Decay, with a CD release currently on pre-order through Ascension Records. Many parts of the US have a distinctive sounding Death Metal scene but these Californians worship at the altar of the HM-2w pedal. As the artwork already gives a hint at, this EP is a concept released based around evens in 1453 when the Ottoman armies of Sultan Mehmed II laid siege to Constantinople, the Byzantine capital city, for a gruelling 53 days. The Byzantine Emperor Constantine XI Palaiologos, led his armies into a doomed defence of the city and his catastrophic defeat signified the end of not only The Middle Ages, but the Roman Empire also!

I find the vocal delivery instantly appealing, sickening putrid growls bark out direct no nonsense lyrics throughout that tell the story of the siege, whilst also delivering a distinctly anti-religious leaning. I’ve already mentioned that Ceremonial Decay favour the Swedish style of Death Metal, and they have honed their craft to near perfection with an array of uber-technical guitar solos, intricate sounding guitar leads as well as pure head cracking riffs when ultimate brutality is required. However, this EP is no sprint race of thuggish barbarity, more a well thought out opus that peaks and breaks in all the right places, building suspense right up until the final, glorious moments of closing track ‘Dawn of the Modern World’. Indeed the closing doom laden tones are truly ominous, conveying a sense of unknown peril and terrors yet to be discovered, but that’s the very end of the EP, and before that there are five tracks of thought provoking Death Metal, from a band equally comfortable churning out crushing riffs or slow, intensive guitar leads, supported by high levels of instrumental excellent from the bass and drums. Ceremonial Decay take us back to the time when the world changed, and they do so through the medium of punishing, intoxicating Death Metal wizardry! (Marksson)