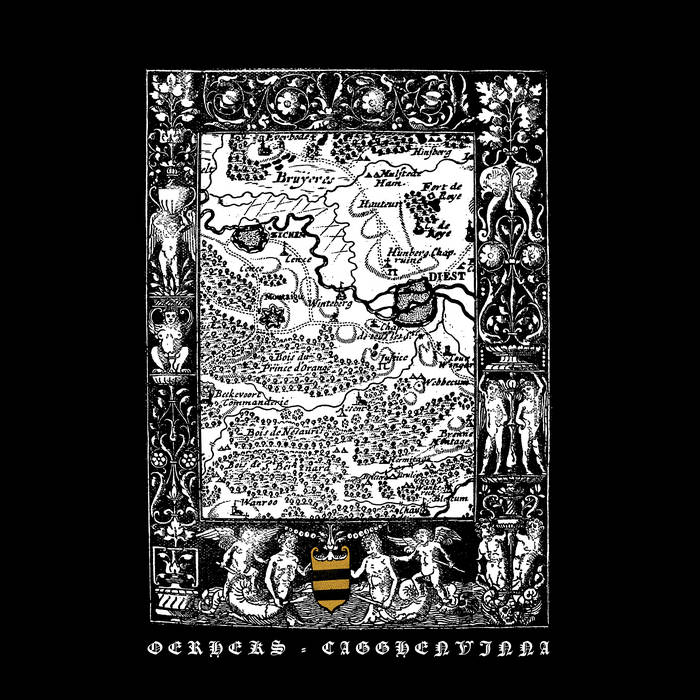 This Belgian Black Metal act Oerheks is the brainchild of H (Hans Cools) who we also know from bands such as Hypothermia, Silver Knife, Kilte and numerous other Black Metal acts. Where he touches various themes with his other creative expressions, he takes a more personal approach here and looks closer to home. Cagghenvinna is the old spelling of the current Kaggevinne or Caggevinne, a region in Flemish Brabant around Diest and Bekkevoort, the slightly sloping landscape, the forests and the local myths and sagas are the inspiration for this first album.

The area sung about offer an enchanting beauty and at the same time is exciting and gloomy. The music, with its dark and muted sound, merges well with the conjuring guitars and atmospheric melodies and feels like a 40-minute hike through the area. Those who know the area a little will recognise the vastness and the slope, H also offers the listener some more concrete geographical points of contact, like the famous 150-year-old oak tree of Scherpenheuvel is sung about in ‘De Oude Eik & Eindende Lust’. On ‘Cagghenvinna’, the local epic and the music are engaged in a ritual dance where the story is told by means of the screaming lamentation of H. The singing, by the way, is regularly interspersed with spoken words, which gives the whole experience some extra drama. Next to the local folkloric element, H seems to have been musically inspired by bands like the French Blut Aus Nord, Drudkh, Agalloch, Fluisteraars, early Ulver and maybe a less-folksy Obsequiae or Saor. But Oerheks, which can best be translated to Primal Witch or Ancient Witch, has enough of its own feel to get rid of the idea that there is too much borrowing going on here. In conclusion, the raw reverb-drenched and at the same time melodic Black Metal on ‘Cagghenvinna’ is a triumph for Flemish Black Metal and a very convincing debut.