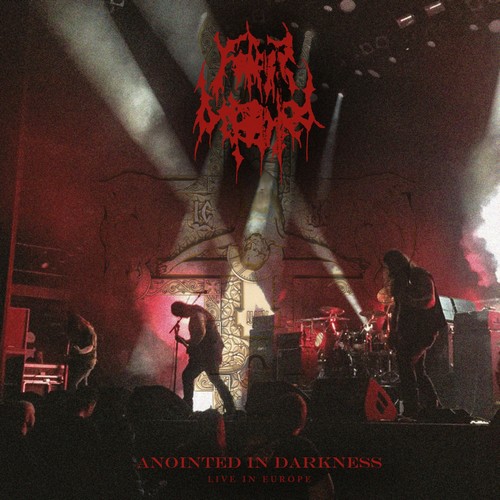 Ah, fuck yeah, Father Befouled. A band that inhabits that spot in my heart that is also filled with the likes of Dead Congregation, Ignivomous, Encoffination and Incantation. The top of the top, cream of the crop Doom laden gravely Death Metal. That kind of Death Metal that you not only listen to, throw horns up and just bang your head to but the kind that you do all that plus feel, experience and yearn for, it never truly leaves you while you grasp those invisible oranges. For it is always part of you, deep deep down inside.

“Anointed in Darkness – Live in Europe” is the newest release (self-released on tape on January 10th, 2020 and cd format from Krucyator Productions shortly after) from these deathly masters and is, obviously, a live album. This album was recorded straight from the soundboard during their April 30th show in Hamburg, Germany as part of the 2019 European tour dubbed “Holy Desolation Over Europe.” Which happened to be the bands first ever tour of Europe, so to have part of it documented forever in recorded form must be something special for the band. And if you happen to be into Father Befouled it is going to be special for you too.

For the music and sounds held within “Anointed in Darkness – Live in Europe” are purely and wholey Father Befouled. Because if it were not for the bit of feedback here and there, some crowd noise, a brief thank you banter and Death Metal voiced song introductions you would swear that this was possibly a really well recorded demo and not just a soundboard recording. But in reality it just happens to be a really damn good live album from an extremely good Death Metal band. It is one of those live albums that people who don’t like live albums will actually like. Hell, its fucking Father Befouled, it fucking rules. Period.  (Ben Schultz)