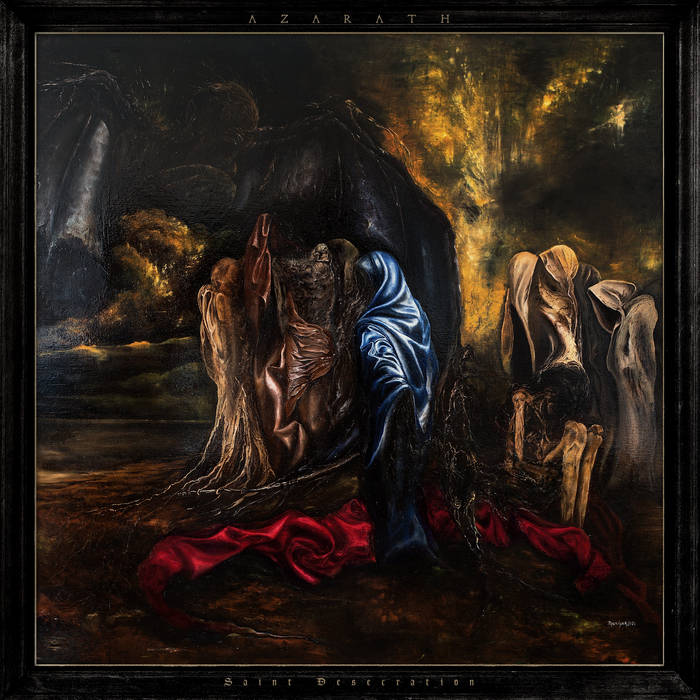 Polish Blastkommando Azarath are back with the follow up to their critically acclaimed record “In Extremis” with the title “Saint Desecration”. As a fan of their previous material and especially “In Extremis”, I was really looking forward to hear this new beast. It also marks 20 years of Azarath releases, which is a big achievement itself. Often seen as just a side project of Inferno (Behemoth), Azarath proof to be more than this, be it on record or live on stage, pure savagery!

What happened since 2017? Necrosodom isn’t part of the band anymore, we have Skullripper instead, and his vocal approach is similar to Necrosodom’s voice. Skullripper does a great job on this record, maintaining the vibe and direction from its predecessor.

The production is fat and in your face as always, the modern “polish” way. The songs are face melting, always ranging between furious Black/Death and atmospheric Black/Death. Inferno is hell on earth behind his kit, always incorporating interesting fills, breaks and (blast)beat variations. Skullripper, Bart and Peter do their magick on their guitars and bass to create another savage Black/Death record that is muscular all the way without losing some key elements, be it the variation, the catchiness, the musicianship, the atmosphere and the brutality this band is known for. I often found some Marduk like riffing here and there which makes the record even more “evil meets brutal”

“No Salvation” says it all, this is crushing, furious blastbeat driven insanity accompanied with slower pinch harmonics and really catchy riffs and grooves in the second half. Inferno proving himself once again to be a beast of a drummer. “Profanation” awaits with killer riffs, groovy rhythms and a catchy chorus at the end.

The blastbeats on this record feel faster, maybe because they are or maybe just because there is more variation in speed throughout the songs. The atmospheric parts have been extended. There are enough full blast songs like “Inflicting Blasphemy upon the Heavens”, nice lead part included. With the last track, also the longest, the dark atmospheric amount is even higher, always alternating with full blast action. This song has got a certain epicness and lots of variations. Each member throws in even more chops, Inferno being on top, closing the record with the best track on the record.

It got me a bit longer to fully appreciate it compared to its predecessor but Azarath show once again that they belong on top of the genre and are more than just a side project. Dark, brutal Black/Death! Kurwa! (DPF)