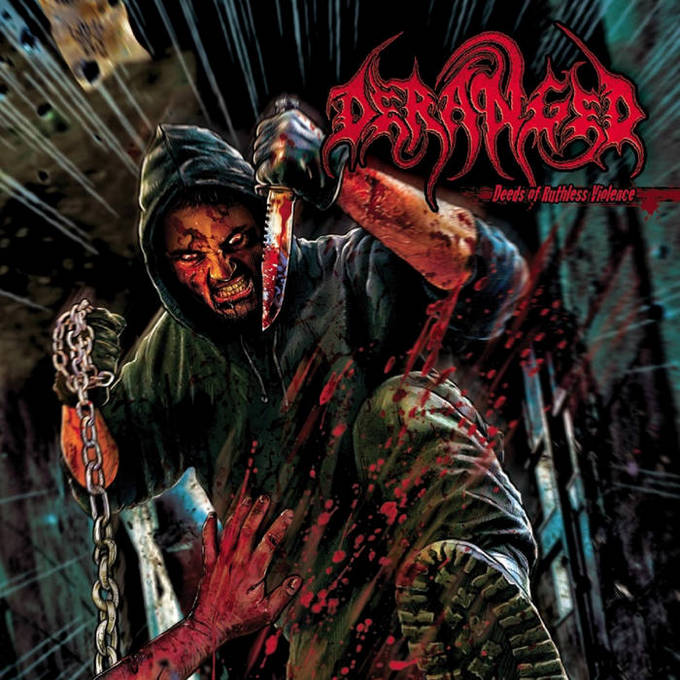 Deranged, the same name as the 1974 Canadian movie about Ed Gein which is the the perfect soundtrack for this and any other twisted serial killer or gore. Their previous album ”Struck by a Murderous Siege” (released in 2016) had artwork of this murderous guy stalking the city and now now we have the same guy bashing and stabbing insanely a victim in an alley… when I saw the album promotion my first impression was “I want this!”.

If you know the Deranged formula, this one doesn’t change so much because it isn’t necessary in the first place. We are talking about Brutal Death Metal at its best so we don’t need any additional elements or progressive skills here, this is a relentless bash on your skull with a relentless drum, much guitar harmonics between each riff, a heavy dose of bass and a voice that describes every ”deranged” song title. I guess this band shouldn’t be the same with another moniker, because Deranged describes precise what they make and their sound.

First time I heard Deranged was the ”Rated X” album back in 1995 and I still make the same stupid smile the first time I played it. I mention this because Deranged is a band that don’t need a description but if you are looking for some stuff in the same Malignancy, Gorgasm, Vomitory or Avulsed style this is the exact thing you need…

Also if your mother in law is visiting you and is complaining with your wife about you spending too much money on CDs, LPS and Tapes instead of going on vacations and doesn’t want to go home, I guess you could show the album cover, read the lyrics out loud (quite an important fact) and play it at maximum volume. I’m pretty sure she will never be back,

This is the kind of band I have only good things to say about, although I consider it a  sad fact that Rikard Wermén, drums since 1991, is the only original member left in the band. So, thanks Mister Wermén…for keeping this Brutal Death Metal Godzilla alive and feed our sick hungry for twisted relentless music. Absolutely recommended! (Gangrene Pus)