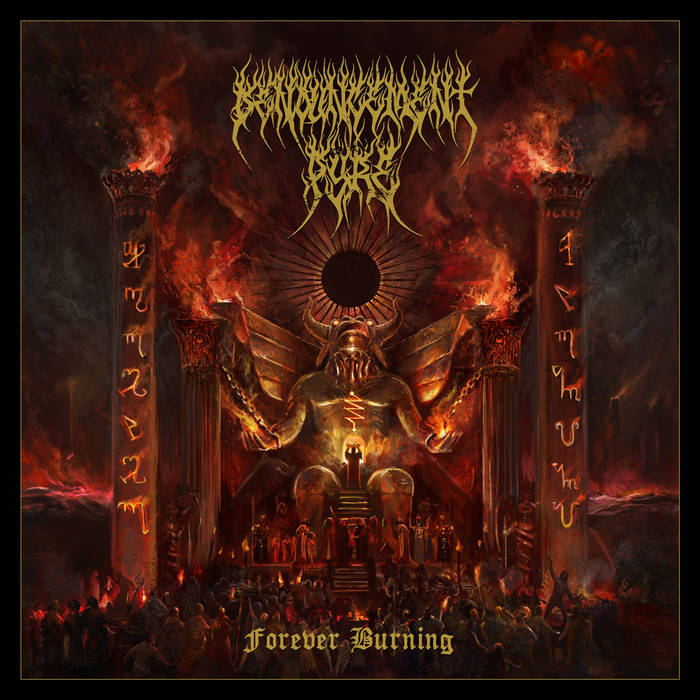 With Denouncement Pyre’s 20th anniversary approaching and a brand new album under its belt, this is a perfect time to give this underrated band some well-deserved praise. Because although the band has (or had) current and ex-band members of bands such as Nocturnal Graves, Hunters Moon, Deströyer 666, Ignivomous, Abominator, Cauldron Black Ram and Cemetery Urn in its ranks, Denouncement Pyre has never received the appreciation it deserves as far as I am concerned.

Along the band’s musical career they seem to have increasingly lost the Death Metal elements in their music, coming to a point that it is fair to call them a Black Metal in full glory. Yet, like many bands these days, there is a lot of melodicism that has slipped into the Aussies brand of Black Metal, not much unlike (former) countrymates Deströyer 666 – yet, it comes without the catchy gang-chants and sing-along parts. Denouncement Pyre still have their music firmly rooted in rather European Black Metal, not too far removed from the Swedish school of Necrophobic or Watain, versatile, melodic and fairly fast with a good measure of blast beats in every track. The tremolo riffs are getting the melodicism into the songs and the dynamics fill in the gaps to capture that same sort of catchiness without going into cheesy territories. On the contrary, Denouncement Pyre might sound less raw and more varied than ever, they didn’t lose their evil spirit. To top things nicely off, those great whammy-bar kind of soloing even give it a certain Morbid Angel ambience, which go remarkably well with the dark nature of the music. One thing is for sure, not all Australian bands do wear that chaotic character of bands like Sadistik Exekution, Bestial Warlust or Abominator.

Although the band never seemed to be in an extreme rush to throw around as many recordings as possible, it has been six years since the last album, ‘Black Sun Unbound’ was released. But listening to the previous albums made it clear that the band is definitely making huge steps forward in terms of song writing and musicianship. I do have my favourites, ‘Almighty Arcanum’ still regularly finds its way to my record player, but I think that this new album is certainly not inferior to that.