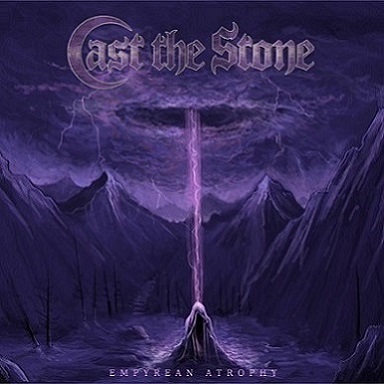 2002; the year albums like Necrophobic’s “Bloodhymns”, Immortal’s “Sons of Northern Darkness”, The Crown’s “Crowned in Terror”, Craft’s “Terror Propaganda” and Taake’s “Over Bjoergvin graater himmerik” were released. And the year of the formation of Cast The Stone with members who have their share in the more technical Death Metal and Grind scene (Misery Index, Cattle Decapitation) and are active in the Black Metal project Scour with Phil Anselmo. Funny thing is that Cast The Stone was their first (serious) band, but the most unknown one. They released one full-length in 2005 and after that Cast The Stone was on a kind of hiatus. Probably due the success of the other bands they are playing in.

2018 became the year Cast the Stone came back with an EP filled with plain, straightforward Death Metal with a slight touch of a modern twist. To keep it quite simple; it is an American approach of new millennium Swedish Melodic Death Metal. If you are wondering how it sounds, take a listen to a song like “Plague of Light”, which starts with riffs in the typical Swedish Melodic Death Metal vein but also has breakdown riffs in the middle part. This EP ends with a cover and maybe you would expect a song of At The Gates, Dimension Zero or Ebony Tears’ A Handful of Nothing”, your ears will get an Infestdead cover. Nice surprise indeed, although as a whole I think this EP will not stand out and I can imagine this will stay a side-project for these guys, concerning the status of their other bands. If you are a fan of nowadays At The Gates or Dimension Zero and don’t mind an American sauce on the Swedish dish served, you probably get a kick out of this one. (Ricardo)