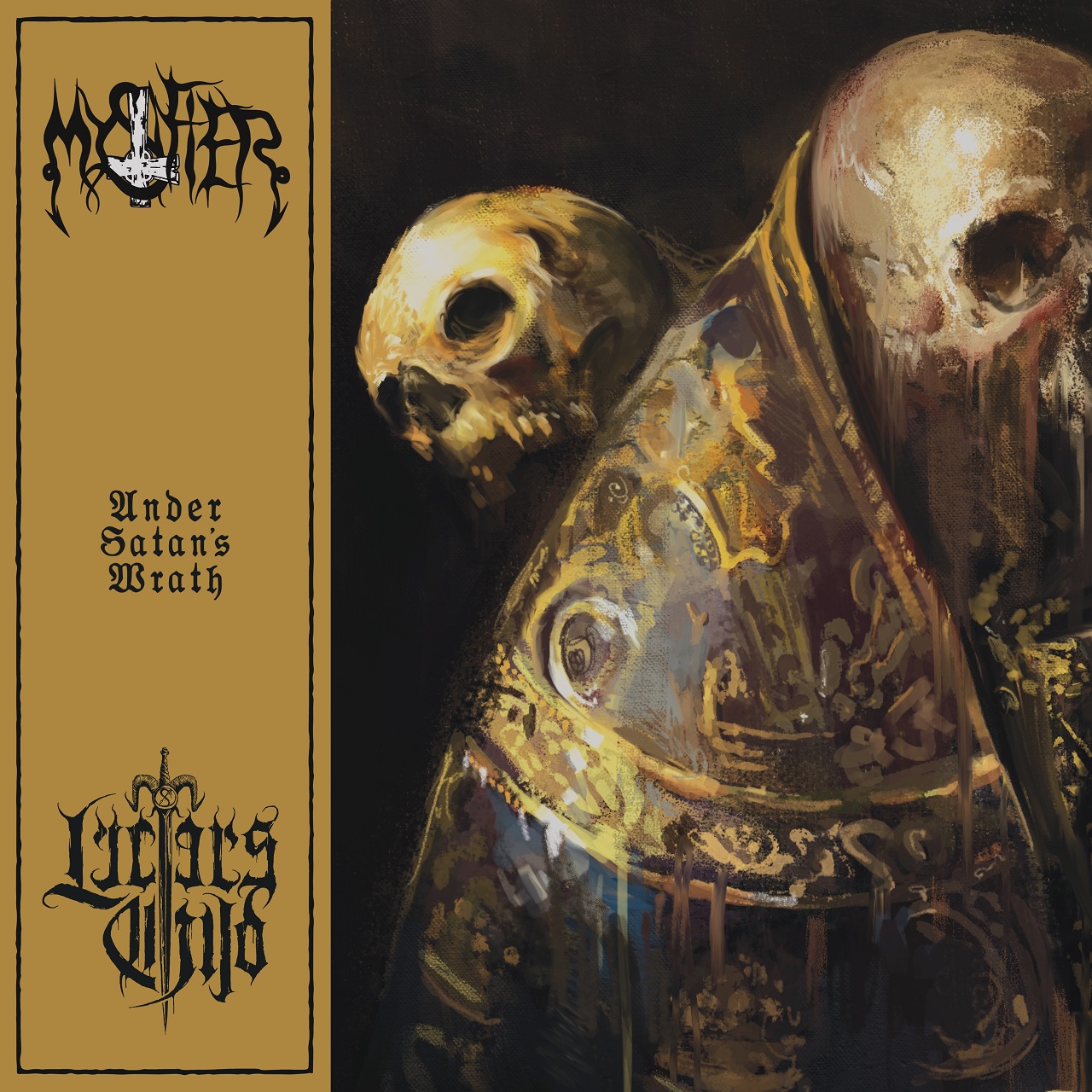 Split releases can be great ways in which to get multiple new bands heard at once, but they can also be lop-sided disasters with bands of varying degrees of quality sit together haphazardly. And then there are split releases like this one, where a band with a long and rich history of Extreme Metal excellence dating back to the 80’s, partners with a far newer band with the end result being a whole new audience for the newer band from fans of the veterans, but also a younger set of fans for the old warhorse. Brazilian Black/Death Metal quartet Mystifier are the veterans in this instance, with over thirty years of rabble rousing behind them and seemingly no plans to call it quits, whilst Greek Black Metal band Lucifer’s Child have been active since 2013, with two album releases under their bullet-belts thus far. ‘Under Satan’s Wrath’ is a bridge between old and new, put out on CD and LP by Agonia Records.

Mystifier get proceedings underway with ‘Death Beyond Holy Creation’, a rampaging wildebeest of a song concocted using key ingredients such as ravenous guitar leads combined with the satisfying pounding of stick on skin, darkly ominous rasping vocals and thundering bass lines. When Mystifier drop the tempo, an evilness of mood rises up like the Dark Lord himself from the very bowels of Hell. ‘Under Inhuman Evil Spells’ is the bands strongest track on this release for me, sporting as it does the same brutality as the previous track but with a fist pumper of a chorus and the diode turned up to maximum on the sinister vibes and guitar leads based groove with some high quality solos thrown into the mix. Each band finishes their portion of the split with a cover version and Mystifier have opted for ‘Worship Her’ by Samael, in which these Satanic Brazilians give it full beans with slow, chugging riffs and even more gravel in the vocals. It’s Samael alright but with the Mystifier signature sound all over it.

Onto Greek Black Metal band Lucifer’s Child whose opening shot across the bows is entitled ‘Satan’s Wrath’ and straight away the intensity and electricity of this release shoots high into the atmosphere as soaring guitar leads, raw commanding vocals and surging drums explode full force. Mystifier even at their most savage have a down to earth, gritty sound. Lucifer’s Child are anything but, and the contrast between bands is startling but very enjoyable. ‘Satan’s Wrath’ feels like the shackles of a thousand winters being cast off and the resultant energy release engulfing the world in an inferno of trail blazing Black Metal fury and intensity, an impression undiminished as ‘Nova Tenebris’ sets out on it’s rampant journey. Through chanted backing vocals and a cascade of ethereal guitar leads the atmosphere on this track is even more stratospheric than the last track, whilst the intensive barbarity of the drumming keeps Lucifer’s Child tethered to their harsh, brutal core, even as they perform wandering guitar solos at will. To close, they settled upon a stunning rendition of Bathory’s ‘Enter the Eternal Fire’ which suits their style down to the ground!

What a release. two bands in their prime. Mystifier doing what they have done for years with no let up in creativity or quality, and as for Lucifer’s Child, where have you been all my life? (Luke Hayhurst)