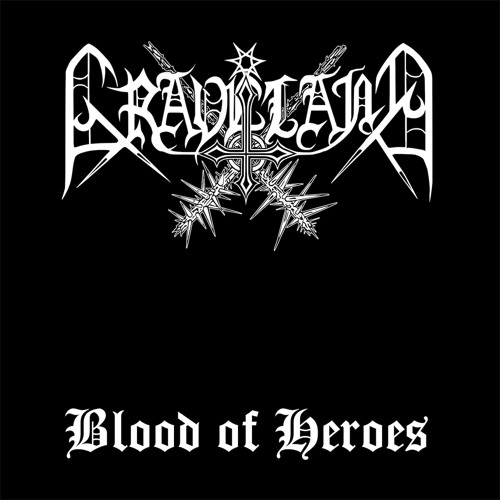 Originally released on a 7″ EP in 2002 on Vinland Winds Records, which was run by Grimnir Wotansvolk (Grand Belial’s Key), ‘Blood Of Heroes’ has seen a few reissues already. In 2004 on CD by German No Colours Records and in 2008 and 2012 on cassette tape (by Night Birds Records and Signal Rex respectively). This is the first vinyl reissue and for the first time the tracks are presented with their original length. The original 7″-pressing contained shortened versions of the songs due to the lack of capacity of a single 7″-side.

For the best sound quality, one side of a 7″ EP can only hold about 5 minutes of music, more is possible, but at the expense of sound quality. The two songs on the original 7″ EP are over 6 and 7 minutes each. The conclusion is that the songs did not come out well enough this way, this is certainly made up for on this 10″ EP, all the more so because they were remixed and remastered by Rob Darken in 2021. The result is great, from a somewhat mediocre EP it went to a fine piece of Pagan Black Metal. The songs also sound more natural and ‘finished’ in this length. With the improved sound, the EP also fits better into the discography than it did initially. Musically, it’s not too far off from the 2000 ‘Creed Of Iron’-album (No Colours Records): mid-tempo epic Pagan Black Metal with heavy orchestrations, battle chants and the typical raspy Rob Darken vocals.

Without disqualifying the original work of Graveland and Vinland Winds Records, this by far superior version of ‘Blood Of Heroes’ makes one quickly forget its original and makes it an EP that claims a proud place in the Graveland discography.