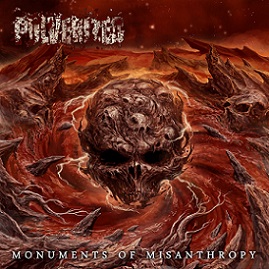 Another Chilean horde that worships extreme metal of the glory days. Pulverized play some old school Death Metal reminiscent of the nineties, mostly the American way since 2006. They released 2 demos (2010 and 2014) and released the now discussed debut in 2018 “Monuments of Misanthropy” through Krucyator Productions.

First thing that I noticed is the crushing production with this slightly dirty guitar tone which has a lot of bottom, accompanied by a rumbling bass underneath. I like it. Second was their mixture between blasting section (nineties style here as well) and up-tempo changes alternating with cool breaks, slow banging parts that are heavy as fuck…everything around the triumvirate Malevolent Creation, Morbid Angel and Brutality with a dose of South-American rawness. There is always a certain melodic approach in their song writing like the aforementioned bands did and something very important, they don`t overdue the ultra-technical aspects but have a more than solid approach when needed. Atmosphere, groove…the song itself is always first. The vocals reminds me  more of Finnish Death Metal masters Rippikoulu and the likes, deep grunting evil with some variations and accentuations here and there for a more pleasant listen. Another thing I like about this record is the use of leads and guitar solos which tell a kind of story and aren`t too present and overloaded. Some are more on the Morbid Angel style, others more towards Necros Christos. The penultimate track is my favourite and something every Death Metal fan should check out as it has a Coffin Texts/Sadistic Intent kind of ending…sick!

A more than solid debut which has its highs on the second part of the record, especially when they vary with tempos and insert ten ton grooves in it and create a morbid atmosphere which leans towards bands like Unaussprechlichen Kulten, Nile or Morbid Angel. Definitely worth a listen or two. (DPF)