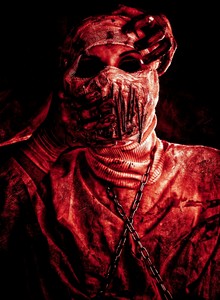 France may be a country of love with Paris being the city of love. But were light is, there shall be darkness too. So it doesn`t wonder that some of the ugliest, most brutal spawns came out of the “Grande Nation“. The breed I am talking of is called Autokrator, and is a mean cold war machine. Only around since 2014, these Frenchmen already released 2 albums and are now offering us their 3rd output entitled “Hammer Of Heretics”. Imagine a savage butchery in a slaughterhouse. Dark cold walls, knives everywhere, masked torturers…all uniformed and prepared for the next slaughter. I am not talking about gore core stuff, but a sort of image they create with their industrial sound and the militant approach to their music. Speaking about it, it ranges from Doom and Drone songs to parts of blastladen heaviness like Diocletian, some “Gateways of Annihilaton”-era Morbid Angel, Portal/Altars and sometimes the craziness of Aevangelist. Don`t try to find out the nuances in the riffs because most are really buried in the production style, but this helps creating the oppressive atmosphere. Nothing for wimps. (DPF)