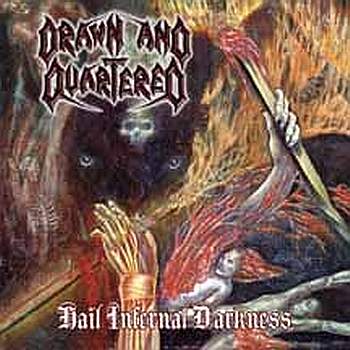 Hail Infernal Darkness. Or hail Drawn and Quartered. One of the most underrated bands just re-released one of their best works on vinyl (for the first time) through Krucyator Productions. What makes them so special and to me underrated? You don`t hear their name mentioned that often when talking about great Death Metal which is a shame. Sure, some just see them too close to some of their major influences and somehow too much copying the “gods“. But since 99% of the bands are talking influences from..and so on, I think it doesn’t make justice to this super group. On “Hail Infernal Darkness” we got some of their best songs with probably their best production sound wise. The best of Morbid Angel, Immolation, a hint of Cannibal Corpse and Incantation with the “progressive” nature of mid era Carcass are mixed into a beast of colossal proportions only touched recently by Dead Congregation. The songs flow naturally without being overloaded. The technical level is high and is used to create songs and not exercises. Each song is a banger. Dario Derna is one of the best and overlooked drummers in extreme metal. Just killer. The basslines by Greg Reeves are fat, and the riffs and leads by Kellie Kuciemba are simply phenomenal. And about Herb Burke, he sounds like Ross Dolan in his best years. Summed up, killer Death Metal, catchy, yet dark and brutal on a technical fine level with a fat production which has enough dirt factor to make the atmosphere the way it was meant to be, paying homage to some of the greatest peers in death metal. The dark lord has come…Hail Infernal Darkness! (DPF)