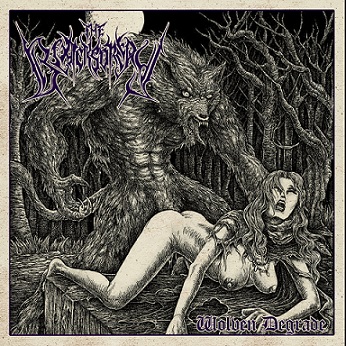 In the most Canadian tradition, The Black Sorcery follow the path of countrymen Blasphemy, or more like Conqueror/Revenge even, with a shot of Archgoat, Infester and Corpse Molestation. This half an hour trip of Bestial Metal which brings us back to a point where imagery and sound were coherent.

Brutal cover, dirty production, vocals from hell, chainsaw guitars, rumbling bass and all blasting pounding drums. Speaking about the vocals, the band not only goes for the shrieky but also for a very Archgoat like growling and some kind of pig squealing here and there which give the bestial sound a fresh nod. Musicalwise I mentioned a lot of paragons before and 2 of them I wish to underline are Infester and Corpse Molestation. Some riffing, may it be dissonant or just upper chaotic reminds me of the 2 underground giants. The atmosphere towards does is very good captured and the vocals have some similarities with them as well.

I can`t comment on the debut, but this one is s good album and hopefully something that will rotate longer. Time will tell. Sick shit nonetheless. (DPF)