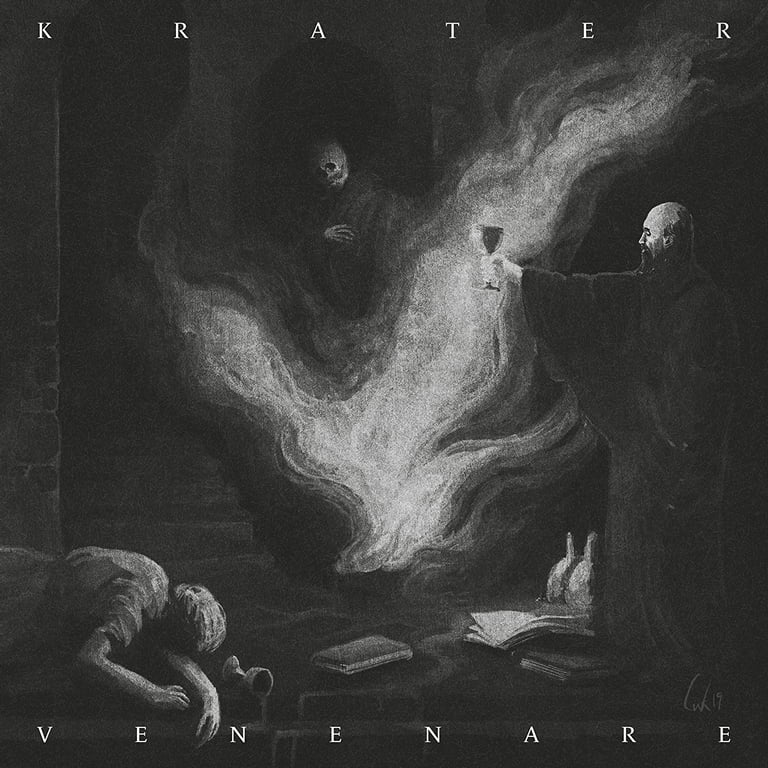 16 years in existence, 4th album coming out in november, 3 years after „Urere“ which I consider one of the best albums in 2016. The newest outcome by the German Black Metal band Krater is named “Venenare“, which means “poisoned“. Humanity indeed seems to be poisoned and the venomous tracks of Krater infect one`s mind at highest If you look behind the curtain.

It first felt odd, different to say compared to “Urere“. I missed the more “brutal“ approach, the thrashy riffs, the various shifts and turns during a song, as well as the more straightforward hook injected songs. However, I realised that I needed more time with this album to understand what`s going on and what the band was searching for on the new record. Soon I understood that some things I thought to have missed where incorporated into a more subtle manner into their carpet of a ritualistic kind of album that has to be looked as 1 song, 1 fluent organism or poisonous haze that stay in the air and slowly intoxicate one`s ears and mind.

An interesting change or experiment is the gangshout like chanting/singing on the record. Almost everything is doubled or more, which is something I`ve never heard like that before. The melodic work for what the band is known for is present as always. The leads are placed perfectly. I hear some Schammasch like moments throughout the album as well as similarities in the melodic and groovy section like their compatriots in Chaos Invocation (another example of finest Black Metal). Atmospheric waves are the key on this record and the ferocious nature is still present, although not as direct as on its predecessor. There is more variation and experimentation and still 100% Krater like. Each member made an excellent job, delivering flawless musicianship without exaggerating. Greg Chandler on his duty did a great job on production as well and Chris Kiesling delivered a suitable cover for this fantastic album (one of my favourite artists right now).

Fans of their previous work can grab this one without hesitation. If you like black metal with atmosphere that has a lot of 90s feelings in it with a more modern approach should check it out as well. Maybe you`ll need more than one spin (which isn`t that bad though) to grasp this record in its full majesty but you will be rewarded for sure. Highlight! (DPF)