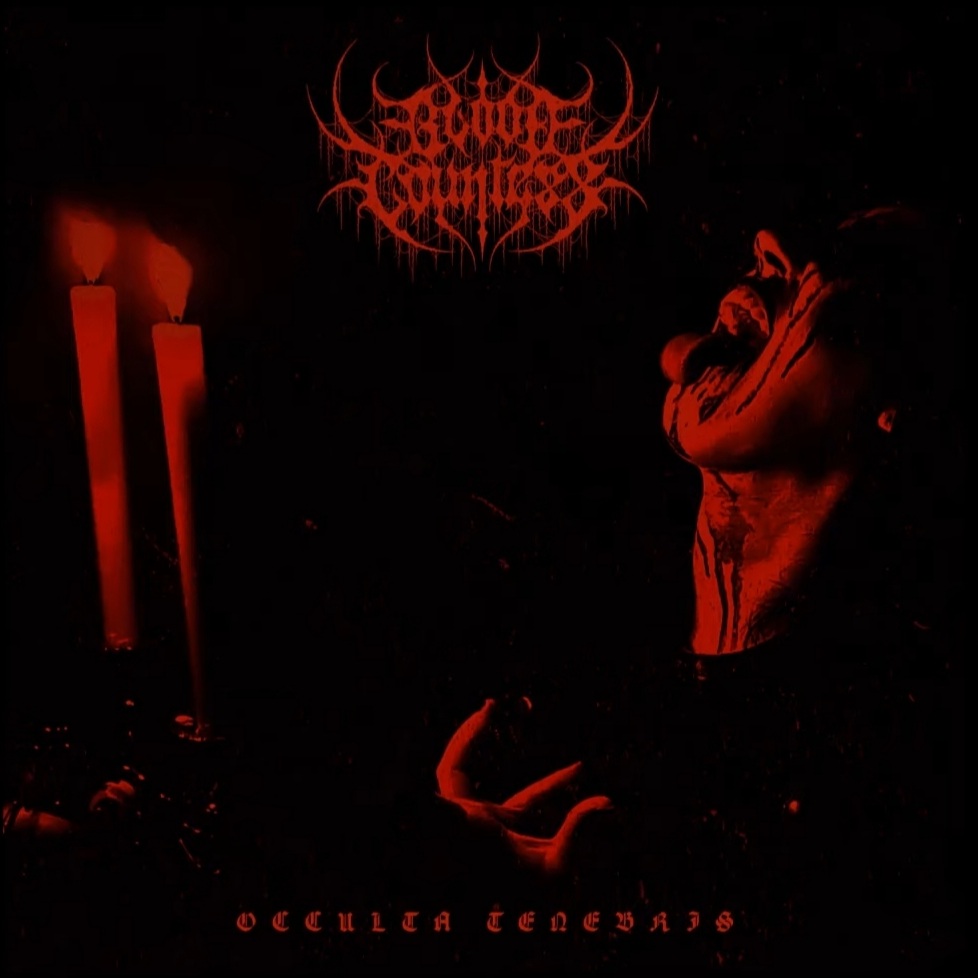 As the band’s name will no doubt tell you, UK Black Metal band Blood Countess draw their lyrical inspiration from the Countess Elizabeth Bathory de Ecsed, more commonly known as Countess Bathory, a Hungarian noblewoman who along with a small selection of her most trusted servants, tortured and killed hundreds of young girls and women during a twenty year reign of terror and bloodshed, starting in the late 16th century and through into the early 17th century.

It’s a wholly suitable subject matter for Black Metal, and Blood Countess are a band with sterling Black Metal pedigree. Wearing their influences such as Venom and Burzum unashamedly on their sleeves, ‘Occulta Tenebris’ manages to be both a nostalgic glimpse into the genres past, whilst also acting as a harbinger for the savagery or bestial nature of the genres present and future; and let me tell you, when it comes to savagery, Blood Countess hit levels of barbarity that many bands of this nature can only dream of.

Opening track ‘Storms over Carpathia’ is almost a modern day retelling of Venom’s ‘Countess Bathory’, with similar ravenous riffs and maniacal blast beats creating a cavernous aura of impending carnage. This is a song that speaks to the confidence that Elizabeth Bathory must have felt as she wielded her significant power and first engaged in her tyrannical exploits, and as vocalist The Cuntess rampages through this opening track, you could be forgiven for thinking the spirit of Bathory flows through her as the sheer maniacal energy that compels a person to commit murder on a genocidal level is controlled and delivered into this performance.

However, my favourite track of the album is ‘Ad Altare Sanguinem’, meaning to the altar of blood. The dark undertones running through this track for me are so reminiscent of ‘Filosofem’ era ‘Burzum that I’ve had it on repeat for pretty much the last week. Yet here the similarities between Blood Countess and the brainchild of Varg end, as this is another blazing ode of sadism, fast paced and rauchhaus, seething in it’s hostility as it lays wide open the masochism of Bathory in her torture of her victims! Again, the vocals are delivered with a blistering ferocity, but it’s the cold, gut wrenching riffs that really cast their spell here, drenching this album in a foreboding darkness.

Of a more catchy nature, ‘In Virgin’s Blood’ loses none of the albums ferocious momentum but does unleash, dare I say it, a slightly more mischievous, playful nature to the overall mood as the drumming display of Nihilanth really surfaces here, along with some wild and intoxicating guitar solos. ‘Ululation of the Grief Stricken Peasants’ is more of the same punishing pace but is by no means filler. In fact the guitar play here really hooks you into the harsh melodies and the lyrics are gripping in their intensity. ‘Save your breath, For when you will be downtrodden by The Countess, bleeding raw, carcass whore, peasant waste.’

Following a brief instrumental interlude entitled ‘Screams over Carpathia’ in which the album plumbs news depths of darkness and horror, Blood Countess kick of Side B (I’m listening to the cassette version) with the lustful ‘Orgasm Leading to Death’ which again gives huge props to the forefathers of early 90’s Black Metal whilst exploring the sexual sadism of Bathory in all it’s depraved glory. As is now the modus operandi for the band, this is another gut-busting expression of speed and chaos, and whilst I often find bands who stick to a fast tempo monotonous, in this instance they manage to keep my attention throughout with a sublime mixture of savagery, historical lyrics and bleak malevolent atmospheres.

Penultimate track ‘Ferenc Nádasdy’ (Count Ferenc II Nádasdy de Nádasd et Fogarasföld – Also known as The Black Knight of Hungary, and Elizabeth’s husband) is another ode to Bathory’s never ending lusts, which despite her marriage ran rampant unabated. ‘I am unfaithful, A she-devil, I am a bloodthirsty nympho queen’. Sadly, all good things must end, and so this juggernaut of an album closes with the telling of Elizabeth’s demise in ’21-08-1614′. The slowest track on the album, this is a mournful celebration. ‘Confined in this castle, until the end, In this chamber draped in fear, No guilt, No shame, My beauty wilts unseen, Frail and weak, Frail and weak.’ Elizabeth mourns only herself as her vanity runs rampant on her emotional state, once more told through the powerful vocals.

That this is a sublime piece of Black Metal in every way is without question. That Blood Countess have managed this on their debut album (with only their 2019 demo preceding it) is simply mind blowing, and you’ll be hard pressed to find another debut album this psychotic, mesmerizing and bloodthirsty anywhere else. (Luke Hayhurst)